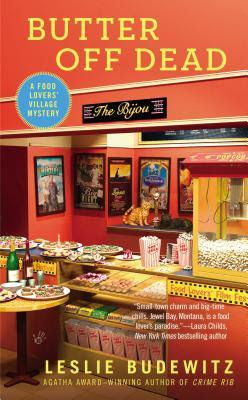 This week I'm waiting on Butter Off Dead. This looks like fun and I love old time movie theaters.


As the national bestselling Food Lovers’ Village Mysteries continue, the merchants of Jewel Bay, Montana, try to heat up chilly winter business with a new film festival. But their plans are sent reeling when a dangerous killer dims the lights on a local vendor...

In an attempt to woo tourists to Jewel Bay and cheer up the townies, Erin Murphy, manager of the specialty local foods market known as the Merc, is organizing the First Annual Food Lovers’ Film Festival, filled with classic foodie flicks and local twists on favorite movie treats. But when her partner in planning, painter Christine Vandeberg, is found dead only days before the curtain rises, Erin suspects someone is attempting to stop the films from rolling.

To make matters worse, Nick—Erin’s brother and Christine’s beau—has top billing on the suspect list. Convinced her brother is innocent and determined that the show must go on, Erin has to find who’s really to blame before Nick gets arrested or the festival gets shut down. But the closer she gets to the killer, the more likely it becomes that she’ll be the next person cut from the program...