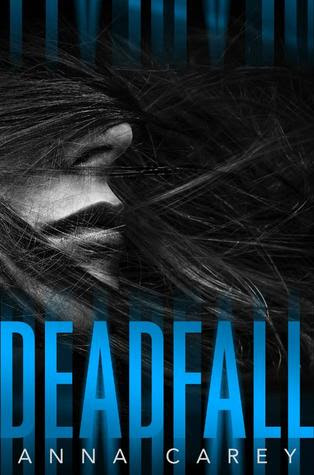 Deadfall by Anna Carey picks up right where the first book Blackbird left off with Sunny taking a train to escape the people hunting her. She's a pawn in a game where people hunt other people for sport- and she only has a few vague memories of her time before she woke up. In Blackbird she eventually met a boy named Ben who helped her- but she discovered that he was part of the game. Fleeing from a hunter who almost killed her, she went to the train station- and found Rafe, a boy she vaguely remembered.

This one starts off with Lena (her real name) and Rafe on the train heading for New York. Rafe knows there are other targets out there, on the run, and hopes to meet up so they can help each other. But when things don't go according to plan, they find themselves on the run again. Meanwhile, the group behind the hunt sends Ben to New York after her- and Ben has to decide where his loyalties lie.

"Come out, come out, wherever you are," she calls. Her tone is playful, singsong. It gives you chills.

This is a fun, quick read. The story is told from Lena's POV, although we get some other POV's as well, helping to understand crucial parts of the backstory. It flows well, with lots of action, and it's nice to see other targets. This is a fast paced thrill ride, with New York City as the backdrop, and a pretty twisted set of antagonists. Being a duology, it might feel a little rushed the way everything is wrapped up, but then again there's no second book syndrome- everything is moving. The characters aren't super deep, but there's enough there to satisfy. This is a fun actioner and a nice follow up.
Posted by Greg at 2:00 AM