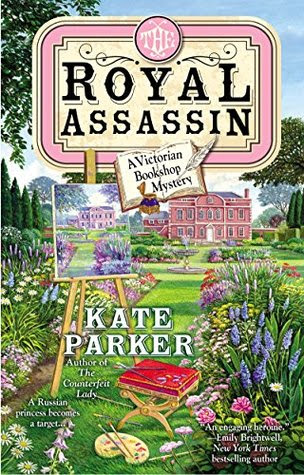 The Royal Assassin is the third book in Kate Parker's Victorian Bookshop mysteries. Georgia Fenchurch is an antiquarian bookseller who also happens to be a member of the Archivist Society, a group that looks into matters discreetly for those who engage their services. They also work with the Duke of Blackford, who is sort of a liaison for them with the government and has worked with them in the past. In this one Blackford walks back into Georgia's life needing her help. It seems the bodyguard of a visiting Russian princess was killed on a train from Scotland, and the crown fears that the princess- or her fiance the Duke of Sussex- will be next. Blackford wants Georgia to pose as a secretary to the duchess hosting the Russians, so she can get close to the parties involved.

Georgia soon finds she has her hands full with the princess, who likes to dodge her chaperone. The Russians fear that anarchists will assassinate the princess, and want harsh measures taken to prevent that.

I looked at him in amazement. "We don't do things that way in England."
"You see the problem."

I enjoyed this third installment in the Victorian bookshop mysteries. It's a pleasure to revisit these characters, and to get to know them better. The familiar dynamic between Blackford and Georgia is there- they obviously love each other, but due to differences in their social class they cannot move forward. Blackford is a duke, expected to marry well and produce an heirm while Georgia is a bookshop owner and not a suitable wife. The romantic in me wants to see forward movement- let them get together somehow, even if the realist in me knows that probably would not- or could not- happen. By the third book I wanted something more than wistful thoughts and swooning when they can share a discreet private moment- but again, the rules of society prevent this. It probably doesn't help that another cozy series I'm following has development as the series progresses- characters change, get married, etc. So maybe I'm judging by that standard, against an era with very different mores.

And there is some development, to be fair. Emma and Sumner, two supporting characters with a lot of potential, do get some some screen time here and develop nicely. We also get movement on the subplot regarding the killer of Georgia's parents- she meets him in this one, and her and Blackford are determined to bring him to justice. And this is a really fun series. I look forward to more.

I have to say something about the Archivist Society. I haven't said much about them in previous reviews, but they are an integral part of these. I very much enjoy their meetings- who wouldn't want to go to Sir Broderick's stately townhouse, have hot tea and delicious scones, and talk mysteries and cases with other members- an eclectic group of shopkeepers, ex- policemen, high society people and others? It's a neat concept. The supporting characters- Emma, Sumner, Phyllida, even Blackford's butler Stevens- are all enjoyable. This series is rapidly becoming comfort reads for me. This is a fast paced story, with something always happening.