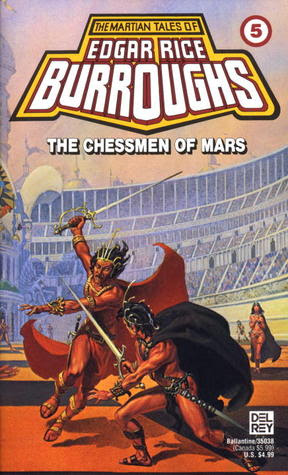 The Chessmen of Mars is the fifth book in the John Carter series by Edgar Rice Burroughs. Cover art by Michael Whelan. I love this cover for the background. The chess arena with its black and orange squares and domes and towers in the far background. Whelan painted several distinctive Mars covers, but this one grabbed my imagination as a kid. I still love it today.

Imagine a great game of living chess, fought to the death, in a fabulous city on a decadent world. A world with two moons and city states- some savage, some refined- a world of daring swordsmen and beautiful women. That's the Mars books in a nutshell. These were some of my favorites growing up. I re- read some of these recently, and to be honest some hold up better than others. Nevertheless, no one quite captures the feel of ERB's Mars like this artist- and these images still fire my imagination.


This week is a two for Friday- I have the Spotlight planned out for several months and couldn't figure out where to slot this one, so here it is!

Cash Crash Jubilee  is an interesting name for a book, but what caught my eye about this one is that cover. The story is set in a futuristic Tokyo and I like the neon and the rain coming down. All we need now is a huge billboard advertising the off world colonies! I'm a sucker for futuristic cityscapes and the cyberpunk- ish look here appeals to me. Does this one look good to you?


A cyber-dystopian thriller unlike any other.

In a near future Tokyo, every action—from blinking to sexual intercourse—is intellectual property owned by corporations that charge licensing fees. A BodyBank computer system implanted in each citizen records their movements from moment to moment, and connects them to the audio-visual overlay of the ImmaNet, so that every inch of this cyber-dystopian metropolis crawls with information and shifting cinematic promotainment.

Amon Kenzaki works as a Liquidator for the Global Action Transaction Authority. His job is to capture bankrupt citizens, remove their BodyBank, and banish them to BankDeath Camps where they are forever cut off from the action-transaction economy. Amon always plays by the rules and is steadily climbing the Liquidation Ministry ladder.

With his savings accumulating and another promotion coming, everything seems to be going well, until he is asked to cash crash a charismatic politician and model citizen, and soon after is charged for an incredibly expensive action called “jubilee” that he is sure he never performed. To restore balance to his account, Amon must unravel the secret of jubilee, but quickly finds himself asking dangerous questions about the system to which he’s devoted his life, and the costly investigation only drags him closer and closer to the pit of bankruptcy.

In book one of the Jubilee Cycle, Cash Crash Jubilee, debut novelist Eli K. P. William wields the incisive power of speculative fiction to show how, in a world of corporate finance run amok, one man will do everything for the sake of truth and justice. (less)
Hardcover, 392 pages
Published May 5th 2015 by Talos
Posted by Greg at 2:00 AM