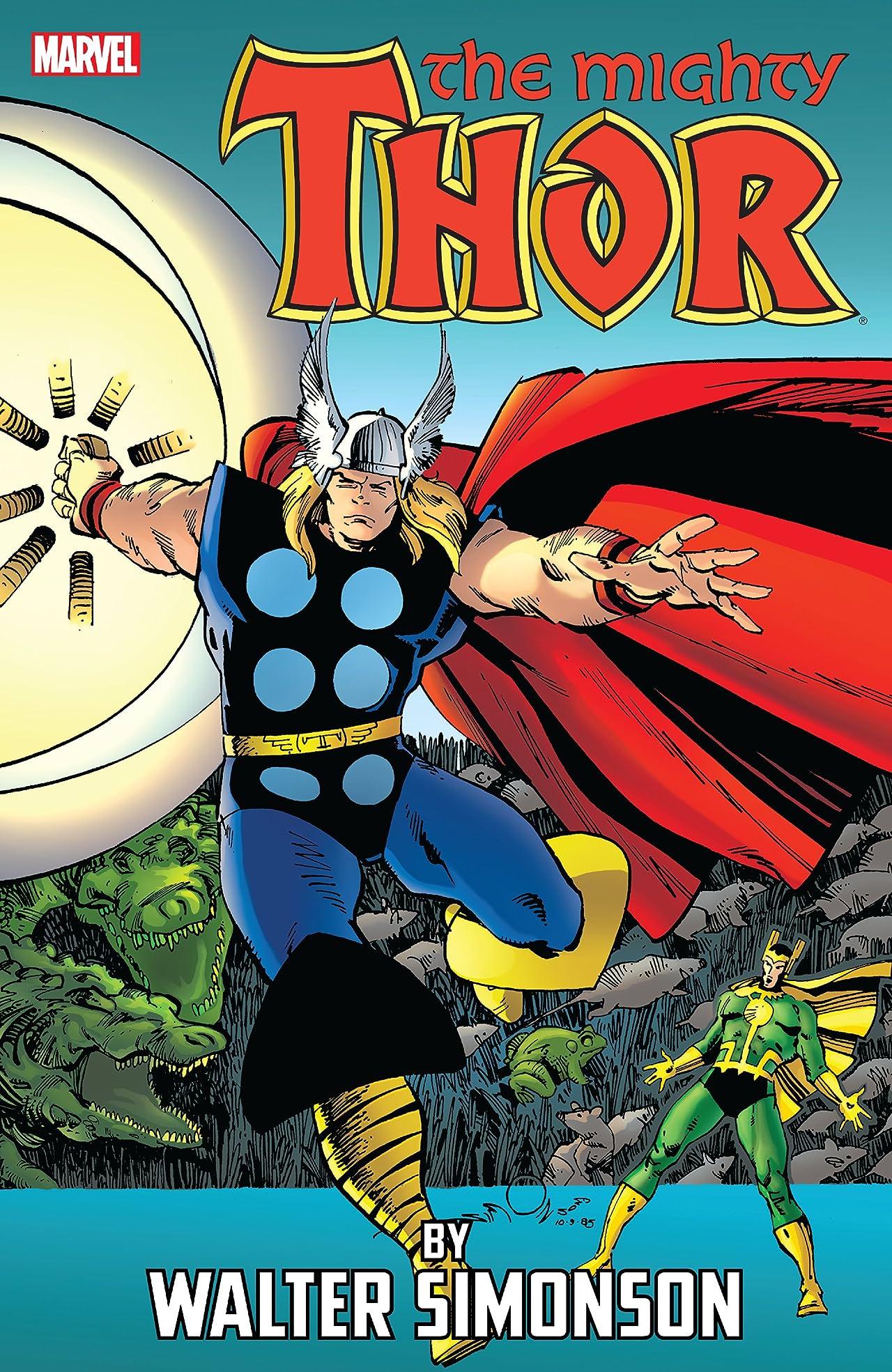 Thor by Walter Simonson Vol. 4 picks up after the events of the last collection and mostly concerns plotting over the throne of Asgard. Odin is missing, possibly dead, and Thor has been splitting his time between Earth and Asgard, as he does, leaving Loki to think he has a shot at the throne. Thor renounces the throne for himself and puts forth Balder the Brave as the best choice- and he's probably not wrong, but Loki won't go down without a fight. And a dirty trick or two. His first stratagem involves the famous Thor-as-a-frog storyline. Yes Loki weaves his magics and transforms Thor into a frog.

Throg (can't resist) promptly gets embroiled in a war between the frogs and the rats in Central Park- and in a nod to urban legend Simonson even draws alligators from beneath NYC into the fun. It's all wacky and good fun.Thor of course makes it to Asgard in time (barely) for the gathering to choose a new ruler, and from there shenanigans continue to ensue as more of Loki's trickery comes to light. It involves Malekith the dark elf and serves to cap off a long running storyline once and for all.

I haven't been a big fan of Malekith as a villain throughout this series- he just doesn't seem very developed- so it's nice to see that storyline conclude, and at the same time I find myself wearying of Loki as well. I think Simonson has done a good job of portraying Loki as both ruthless and somewhat humorous- but always dangerous- and at this point I just feel like it's time to move on. We also continue to see the depth of friendship between Thor and Balder, which is nice- some of the trickery Loki (and Malekith) are fomenting involves the brave one, and so we get to see Thor and Balder at cross purposes (but only briefly)- rather the focus is on their long friendship.

Balder is of course taking the throne so we're getting a new status quo. And the usual side character bits continue to shine, including Volstagg's family and the cute interactions between little Hildy and grim Hogun. These are above all fun, and I love that we see little details we don't normally see- Thor at home, various shots of Asgard in all its glory, etc. At the same time Simonson was coming to the end of his run, and there does seem to be a little drop-off in quality here, especially towards the end.

The last few issues, and really this whole collection, were not as gripping as the earlier stuff I've reviewed. The first three volumes are absolutely essential Thor in my view, and while this one is good, it doesn't feel essential. Still this one ends on a strong note, as Thor is drawn into the Mutant Massacre storyline that was running through X-Men at the time. Thor ventures into the Morlock tunnels as the Marauders are killing everyone in sight, and let's just say Thor is a little more than they bargained for. So the ending of this one brings it almost back to a must- have for me, as I love how Thor deals with the carnage he finds under NYC.

The Mutant Massacre tie- in is a highlight for me of this collection. Thor is injured and several Marauders have a go at him, until finally Thor has to actually kill one of them to save a life. For all his power you don't actually see Thor kill a lot in the comics, but here he takes someone out.

Thor talks to frogs (heck, he is a frog for a while) and does dishes.

I thought Simonson was building towards a possible relationship between Heimdall and Amora, but here she spurns him so maybe not. Oh and no one thought to tell her of the Executioner's sacrifice??

Balder continues to get some focus, even after being crowned, as he ventures into the Endless Desert on a quest to save one of the ravens of Odin. .
Posted by Greg at 9:52 PM