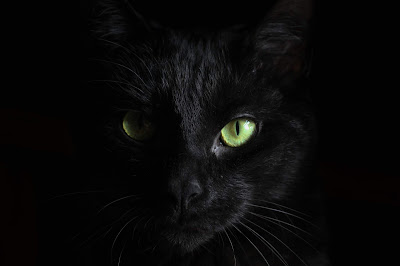 A couple of years ago I shared this quick story about some strange happenings on Halloween. I thought I'd re- share it this year just to have some fun. The inspiration was an earlier story I wrote for the HoHoHo Readathon about a certain kitty's experiences on Christmas Eve. So here's a look at a cat and some odd visitors on a dark and blustery night. Enjoy!

The night was here. Anticipation had been building all week, as the little humans ran to and fro, trying on their costumes and squealing about candy, and as the whole family gathered around those ridiculous orange things and cut all kinds of faces into them. They actually pulled all the seeds out and left a pile of them on the kitchen floor- one sniff of those and it was time to move on, Missy thought to herself as she padded into the kitchen. And soon the crazies would come- more little ones, from wherever they came from, mashing on the doorbell and screaming at the top of their lungs, only to be rewarded with handfuls of candy. She would be glad when this silliness was over. Of all the so- called holidays her humans took part in, this one was perhaps the strangest. And yet, she had to admit, there was a certain excitement to it all, with the errant breeze swirling in and the smell of damp and decaying leaves. The leaves had been dancing the last few days, and the air had been cool. It was a stark time of year, there was a feeling in the wind, as if the world was holding its breath

Missy rubbed against Missus' leg as she waited in vain for her water bowl to be replenished. Alas, the humans were not paying attention- tonight had been a pizza night as everyone prepared for trick or treating and the grandmother had come over, to hand out candy while Mister and Missus took the little ones out to wherever they went. Missy meowed and was rewarded with a perfunctory scratch behind the ears, and then was almost stepped on by one of the little ones who could barely see out of their costume. Sigh. Maybe when they all cleared out she could get the grandmother to fill the bowl. She would be more inclined to perhaps leave a little milk out as well...

Missy headed back to the living room, dodging little feet as she went, and leapt onto the couch. From here she had a pretty good vantage point and could wait out the chaos, and could also keep an eye on the water bowl in case someone got with the program. The preparations seemed about done, Mister and Missus were heading outside with flashlights, shooing the little ones before them, and telling grandmother they would be back in a while. Yes, yes, we go through this every year, just get it over with.  No sooner had they headed out than there was a commotion on the front step, and she knew what that meant. Sure enough, the doorbell rang and several voices cried out "Trick or treat!" Grandmother opened up the door to reveal various creatures and outstretched bags. One of the obnoxious kids looked right at Missy and said "Look! A black kitty... " Some of the others peeked in and there were some "oohs" and "aahs". Really? Still, it was nice to be appreciated.  Then they were gone and grandmother sat down in the chair by the front door and waited.

Missy could appreciate the peace and quiet now. She thought about napping, and was just about to close her eyes when the second batch of kids came. Again grandmother filled their eager little bags, and Missy noticed that she was being pretty liberal with the helpings. At this rate she would run out long before the kids stopped coming, as Missus had predicted- that's what had happened last year, but Mister had just pooh-poohed it. "We'll have plenty," he had said indulgently, and Missus had just rolled her eyes. Oh well, not my problem. Time for that nap.

She had just closed her eyes again when Whisper jumped onto the couch, at the other end. Whisper, her older sister, who cared less for the racket and had been hiding in the bedroom waiting for the ruckus to go away. Now she turned around several times before settling in, her tail tucked over her head. Missy watched her through one eye for a few moments, and then heard the scuffing of more little feet on the sidewalk. "Trick or treat" she heard several times, but when she glanced up lazily she saw that these were not little ones at all, but somewhat bigger humans... not quite adults, but certainly not little ones. She wondered at what point it stopped being fun for the humans to prowl the streets clamoring for candy.

Some kind of cat sense went off then, and Missy realized something was wrong. What was that noise? Something scratching at the back window- the one in the laundry room, by the kitchen. Odd. She could tell that Whisper had heard it too, judging by the way her tail was swishing back and forth. Missy was torn between ignoring it and investigating, but as she heard the noise again, very faintly, she decided to indulge her curiosity. The food bowl was that way, anyway.

She jumped down and headed for the kitchen, as grandmother roused herself to hand out more candy. She had obviously not heard anything but Missy knew that her senses were superior. As she crossed the kitchen floor she heard more noises, faint but unmistakable. Something was trying to get in. It was not just tree branches scraping against the siding. She went around the corner cautiously, peeking into the laundry room. The room was dark and quiet, and for a moment she didn't see or hear anything. Maybe it was nothing... but then, there. At the window. Sure enough, something was prying the window open. She saw a little wizened shape, almost like a gnome, with a little sharp thing in his hand. He was using this very thing to pry at the window latch and he had it just about open. Missy could feel the cold breeze waft in, and outside the window were two - somethings- they looked almost like cats themselves, but they had no fur and blazing greenish eyes. Instinctively she knew they meant no good to anyone in the household... and she also knew that this night, of all nights, was when dire things prowled the dark yards, and would get in to cause mayhem if they could.

Arching her back and hissing, Missy knew she couldn't let these creatures enter her home, or hurt the little ones. The gnome thing noticed her then, and hissed at her himself, waving his pointy little blade at her. He croaked something in an unknown tongue, and his voice was like poison. The first of the creatures was halfway through the window when Missy sprang.

Bounding onto the sink she swiped at the gnome, her claws catching his blade and turning it away. He lost his balance and fell, and then the first of the nightmare creatures was on her. They were about the same size, but this thing was no natural creature- Missy could sense the wrongness of it. She knew of course that some houses had fey inhabitants- some good, some bad- but she had never seen anything like these creatures. She knew she was overmatched, but what choice did she have? The creature slashed at her, and she felt razor sharp claws bite deep, then its weight was on her and she felt smushed and vulnerable as the second one scrabbled its way through the slightly open window. This wasn't going well... and here was the gnome again, climbing back up towards her with murder in his eyes. Yowling and slashing at him with her claws, she twisted and struggled in vain.

Then Whisper was there. A sleek black shape sent the gnome down again and caught the creature pinning Mystique full in the face with her claws. The thing shrieked and recoiled, and Missy was free. Together they slashed and drove it back, and with a panicked shriek it turned and went back through the window. The second creature was already gone. Turning to face the gnome, they found him on his back on the floor, looking at them with anger and fear in his eyes. His blade was in his hands, and he had it held out before him. Whisper advanced, and Missy remained where she was. He glanced from one to the other, pointing his blade at each in turn, and then stole a glance at the open window. Understanding his intent, Whisper swiped at him but let him flee- quick as a flash he leapt for the windowsill, and with a last look back and a snarl, disappeared into the night.

"What is going on in here?" grandmother exclaimed as she entered the room, flicking on the light switch. She stopped short as she surveyed the toppled laundry basket, the clothes all over the floor, and Whisper licking her sisters fur, where there was a long trail of blood. "Good Lord... what have you two done? Shoo- get out of here. You've made such a mess." She seemed then to notice the blood, and the open window. She quieted for a moment, and her eyes narrowed. Then she crossed to the window and shut it, and latched it as well, and peered out for a time, though she couldn't possibly have seen anything. Then she turned and without another word picked up Missy and carried her off. Whisper followed, after satisfying herself that no intruders remained.

Mister and Missus came back shortly after, with two tuckered out kids in tow and candy in their buckets. The kids proceeded to upend their buckets on the floor, and called impatiently for someone to look their candy over, as Mister and Missus conferred quietly with grandmother. Missy was back on the couch, cleaning herself calmly and reflecting on how quickly the night could turn. Whisper had been prowling the house, from room to room, and was now lying on the floor between the kids as they sorted their candy. She glanced at Missy and held her gaze, and Missy understood.

On a cold moonlit night there were more things aprowl than a human could know, and as their kind had done for years beyond count, the cats watched. Tonight their work was done... and it was time for that nap, after all.