Movies That Suck The Valley of Gwangi

This week I am watching The Valley of Gwangi. Cowboys and dinosaurs- how can you go wrong? Plus the legendary Ray Harryhausen and his stop- motion special effects for the dinosaurs. This is honestly one of my favorite movies, and a guilty pleasure at that- but yeah a good argument can be made that this sucks. It's all in how ya look at it. So let's take a look, shall we?

It's turn of the century and we're somewhere south of the Rio Grande. T.J. Breckenridge's wild west show is in town and Tuck Kirby (a very dapper looking James Franciscus) is looking for T.J. (Gila Golan), his old flame- he wants to buy part of her wild west act. He used to be part of her show I guess. He hooks up with a street smart kid named Lope who's a real hustler, and before long he and T.J. are reminiscing about the good old days- although T.J. is not too happy to see him. Apparently he broke her heart or some such. You know.

Turns out Tuck works for himself now, buying and selling acts, and he wants to buy T.J.'s horse Omar for Buffalo Bill's Wild west show. T.J. clearly still has some feelings for Tuck, but she throws him out anyway. He's quite a rogue, apparently. On the way back to town he meets  a paleontologist named Bromley, who's out excavating for dinosaur bones. He seems like a jolly fellow- when Tuck calls him an archaeologist, Bromley corrects him, saying he's a paleontologist. "We dig deeper."

Okay twenty minutes in and T.J. is back with Tuck- that was quick. Lope was dumb enough to get in the ring with a bull, and had to be rescued- in the process Tuck got roughed up and T.J. freaks out, calling him "darling." Well then. We also meet Carlos, a rough and tumble cowboy who also has a thing for our rodeo owner. T.J. agrees to sell Omar, and when Tuck thinks that was a quick turnaround, she unveils her new attraction- an Eohippus. She thinks the little horse is going to turn her struggling rodeo around.

Tuck, being the rogue he is, brings Bromley in to check it out, and they're both dazzled by the possibilities. Carlos found it, but when he won't cooperate they're off to a gypsy camp that Carlos mentions, and a blind old witch who knows all about the Forbidden Valley, where the Eohippus came from. Problem is the witch wants nothing to do with them, believing a curse will fall on all of them if the Eohippus is not returned. Bromley trells her where the horse is, knowing she'll send men to grab it and return it to the valley- he intends to follow. Everyone is a rogue here.

Tuck finds out about all this from Lope and gets there just in time to see the gypsies escaping with the stolen Eohippus. He rides after them and so does T.J., with Carlos and her men. Everyone's on their way to the valley! But there's a misunderstanding- of course there is- and T.J. thinks Tuck was in on the theft, so she lassos him up. They clear it all up just in time to find the valley, and the little Eohippus, who leads them on a merry little chase, right through a cleft in the rock. On the other side- dinosaurs!

They're not in the valley long before a pteranodon shows up and absconds with Lope- he probably looks like a pretty good snack- and Carlos saves the day by wrestling it after it lands to eat Lope, eventually killing it. A pretty good scene, by the way, especially the close up shot. Meanwhile Gwangi appears! The other cowboys with Tuck spot an Ornithominus and decide to capture it for the show- but Gwangi, an Allosaurus, decides it's lunch. They all flee except for Bromley, who wants to explore, and he almost gets eaten by Gwangi before a Styracosaurus shows up. I'm telling you, after forty-five minutes of no dinosaurs they're falling out of the woodwork now!

Gwangi takes the pterandon off to chow on and the cowboys meanwhile set up camp in a big cave they find. Cozy. One of the dudes calls Tuck a horse thief and gets decked, and they straighten out that Tuck didn't steal the Eohippus. Carlos just said that to make Tuck look bad. So everybody's cool, although when T.J. talks to Tuck he calls her a "cockeyed female" at one point- he certainly has a way with women. And some of that dialogue is a pretty telling reminder this came out in 1969. We do get a nice quiet moment though with the two of them, with T.J. saying she wants to sell and Tuck suggesting they buy a ranch in Wyoming. Then they kiss. Aww... there's even a bit of humor when Bromley wanders into a pit trap that Tuck set up for the dinosaurs. .

You know, this isn't bad for what it is. Gwangi shows up the next morning though and they have to fight it off, until Styracosaurus shows up again. Oh, and Carlos is toast. A pretty good lassoing scene though- I read somewhere it took two and a half months to film, between the actual lassoing and merging it with the stop-motion animation. Anyway this scene is clearly the highlight of the film, although I'm not sure why a plant-eating Styracosaurus would attack? But who knows? The fight is pretty good, with Gwangi eventually prevailing- but he only takes a bite or two out of Styracosaurus before chasing the cowboys again. Man, he's a greedy thing!

So Gwangi is pissed, and when the remaining cowboys flee the valley through the cleft in the rock wall, it tries to follow, precipitating a rock fall that knocks it out. Mm-hmm. Whatever. Well they had to have some way to capture it I guess- lassoing clearly wasn't working. Oh and their glee at capturing it is tempered by the loss of Carlos, which was kinda sad. Okay moving on- they now drag Gwangi back to town and put him on display, but the gypsy witch is not through. It's too bad too, because the addition of the new attraction was packing them in! But she has her helper set Gwangi free, and everyone goes batshit trying to get away. It's loose!! Chaos ensues and people get trampled while Gwangi takes down an elephant before heading out after the people. .

I kinda feel bad for the elephant. Poor thing. And again- Gwangi takes like one bite and then it's after the fleeing humans! Geez. Maybe it's the moving prey thing- they run, he chases. Maybe they should all stand still? I love though how he gets a guy, kills him, then puts him down and keeps going. Is he just having fun? I don't think he's even hungry. The cowboys meanwhile go to get guns, but for some reason only Tuck tries to shoot it? I don't know. A lot of people are heading into a cathedral to escape- seriously, the cathedral is beautiful, and it's in Spain where they were filming but I don't remember offhand- and Tuck, along with T.J., takes refuge there as well. Gwangi's not having any of that and breaks into the cathedral, and for some reason even though all the people get out, T.J. And Lope don't seem to. Sigh. Tuck locks the doors so Gwangi can't get out, and after some close calls the three of them get out, after setting the place on fire. Well, that's the end for Gwangi, who burns to death inside the cathedral as it slowly collapses.

That's a shame to see the cathedral go, and to be honest I feel a little bad for Gwangi too. I mean no one wants to see an animal burn to death right? And it was kind of haunting to see all the people outside, listening as Gwangi screamed in its final moments, with the burning cathedral as the backdrop. A pretty sobering end, B-movie or no. I would have liked Gwang to make it to his valley somehow. And Lope has tears in his eyes as Gwangi succumbs.

So... final thoughts. I've seen this before, as I mentioned it's sort of a guilty pleasure, but I'm not sure I ever saw the whole thing, from start to finish. Especially a lot of the early stuff, before the fun begins. So in that sense I think I saw it in its entirety for the first time, and I'm glad I did. It somehow works, with the western flair, the music, and of course the stop-motion wizardry of Ray Harryhausen, which is of course the real reason to watch this. It's a lot of fun, with some familiar tropes, but if you keep in mind it's a product of its time- 1969- it's actually pretty impressive. Of course your mileage may vary, and while yes this is technically a Movie That Sucks, it's actually pretty good. 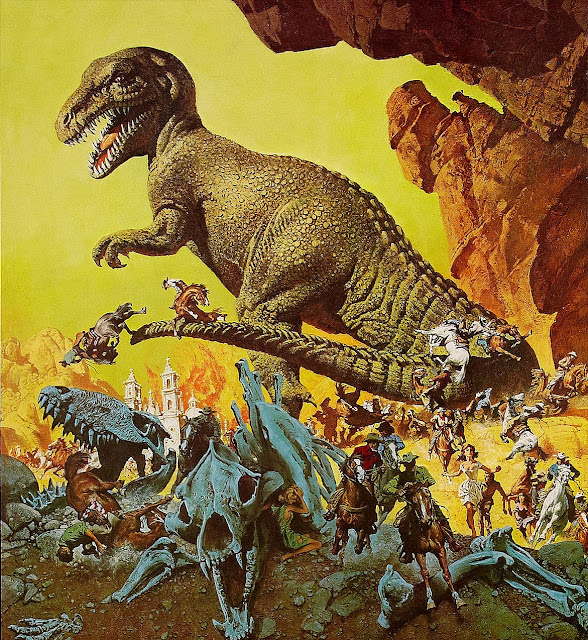