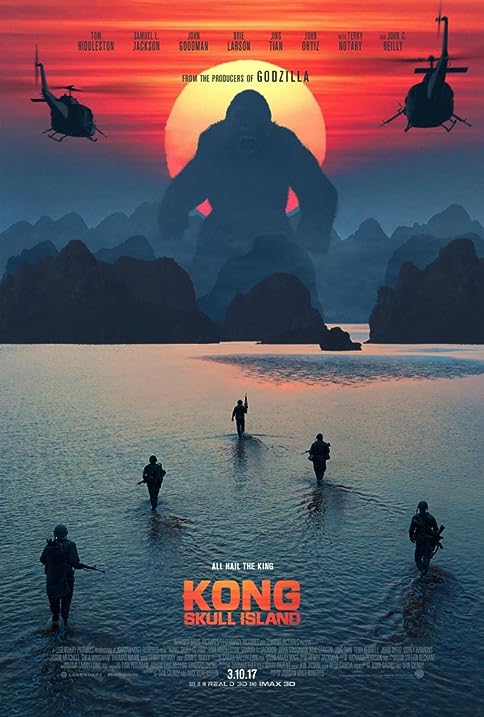 Movies That Suck is a feature where I watch a bad movie and share my reactions to it in real time. Sort of like live tweeting without the tweeting. I watch it so you don't have to! This will be spoilery I guess by definition but since you probably won't want to watch these anyway it probably won't matter? But heads up anyways. So get comfortable, grab a favorite beverage, and let me tell you about a movie that sucks.

This week is Kong: Skull Island. I don't even know why but this sounds fun- I mean it's got Tom Hiddleston and Brie Larson in it, so it can't be all bad, right? Wait, don't answer that. Seriously though, hasn't Kong been done like 1,837 times? Do we need another? But... I note with interest that Legendary is doing a shared monster-verse, and that Kong and Godzilla are gonna show up together in 2020's Godzilla vs. Kong. So... maybe it's good to get in on the ground floor. And this can't be as bad as Godzilla, right? Wait... don't answer that either.

So let's see if this is a trainwreck. We start out with a beautiful establishing shot of an island, somewhere in the south Pacific, in 1944. World War II is of course raging and an American and Japanese pilot both parachute down, their planes wrecked, and they immediately resume hostilities. War is hell even in paradise. And unlike previous Kong outings, this time the monster appears in the first five minutes! We don't see what happens to the two airmen but... it doesn't look good?

We then fast-forward to 1973 and some guy named Randa lobbying a senator to approve his expedition to... Skull Island. Ooh. "The land where God did not finish creation." Okaaay. He's found an uncharted island in the south Pacific, and loads of ships and planes have disappeared there... but how does he know if it's been uncharted all this time? Moving on. Oh and the 1954 nuclear tests were not "tests"- they were trying to kill something (which we know was Godzilla because we all saw that awesome movie right? Turns out Randa's with a group called Monarch that is investigating all this stuff. And they want to get to Skull Island before the Russians do. It always comes down to that.

Off to Vietnam! Because a military escort is needed. Ya think?? Oh Lordy... Samuel L. Jackson is in this. As a jaded colonel who jumps at the chance to do something besides go home- yeah he's gung-ho. And ooh here's Hiddleston- he's apparently a badass (ex-SAS) showing off his moves in some seedy Vietnamese dive. He's the tracker apparently. And then Brie shows up- she's playing Mason Weaver, a photographer who's on to the whole Skull Island expedition, and wants to go. Are introductions done yet? Good, we're underway.

So we set sail and a briefing informs us that the island has been undiscovered for so long because it's surrounded by a perpetual storm system. Cough *bullshit* cough. A perpetual storm system? Anyway... we have a few more team members, biologist San and geologist Brooks. All the military people I'm just skipping cause...really? I mean how many will be left anyway? Oh and they won't have radio contact with the ship while on island, and also they'll have three days to make it to the extraction point. Because of that pesky never- ending storm system, you know. So far this sucks.

Conrad (Hiddleston) and Weaver (Larson) have the usual verbal sparring match to take each others measure, and then we're there! And Randa clearly knows more than he's letting on, because of course. Larson so far is the best part of this, BTW. Wait...they had a few helicopters on the ship and now that they're airborne there's a whole shitload more! Who edited this movie? Seriously, I'm counting ten choppers at least, and there were like five on deck. I think? I could go back and double check, but... who cares? Okay so they're on the island now- ooh nice shot of a dragonfly paralelling the choppers- and they're dropping seismic charges to study the geology of the island. Uh-huh. And guess what? The bedrock is practically hollow! What does that mean? Oh I'm sure we're gonna find out!

So the military guys are having fun dropping bombs until Kong shows up. Death by palm tree! Right through the cockpit. Two choppers down- wait, make that three. Kong is wreaking havoc on these guys, y'all. Choppers going down left and right and he's... stepping on dudes, too. Man. Oh crap one guy gets thrown into the air and hits a helicopter, right in the windshield before the rotors get him...eww. Lotsa carnage. And everyone is either crashed or toast. Oh and way to ruin a pretty good action scene- we have Col. Packard (Jackson) staring down Kong as burning choppers crash all around him. Seriously, why did Jackson have to be in this???

So everyone is down on the island now but separated. Packard tells Randa to fess up about what he knows or he's dead, and Randa admits he's part of Monarch, an agency that looks for MUTO's (Massive Unidentified Terrestrial Organisms). And ooh we're getting some Hollow Earth theory too- Brooks helpfully explains that it's not a crackpot idea, it's real! The island is an emergence point for stuff that lives below. Cool. Beautiful scenery too, by the way- a lot of it was shot in Vietnam, apparently. Anyway the island is home to some unusual fauna, you know, like a huge water buffalo and a... eww, is that a spider? Bigger than shit and pretty gross. Good grief.

Conrad's group finds some ruins and a guy named Marlow, who's been there for a looong time- he's the airman from 1944! Turns out there are people here, and a big ass wall to keep stuff out. Kong is a god to the people and he protects them from the skull-crawlers- big reptiles that come from below. We see Kong kill a few while we're learning the story. And Marlow's got himself a jury rigged riverboat, made out of old plane parts, that they can use to get to the extraction site- hopefully. Weaver, meanwhile, has a close encounter with the big guy- Kong- when she tries to rescue a trapped water buffalo.


Okay I like the northern lights thing- even though they're in the southern hemisphere, that perpetual storm bullshit must cause the effect. Conrad and Weaver are bonding again, staring out at it, as Kong admires its beauty as well. Meanwhile Packard is all about killing Kong, to avenge the men he's lost. The weakest part of the plot, frankly. But they all meet up eventually, even though the floating plane/ boat is silly. And Packard wants to rescue his man, Chapman, who's still out there. Problem is, Chapman got killed a while ago, but they don't know that. Conrad agrees even though Weaver (and me, frankly) think that's a bad idea.

So they're passing through a graveyard strewn with bones and it's skull-crawler time! One of them happens to retch up Chapman's skull- nice, by the way- but does this right next to Conrad, so he sees the dog tags. Seriously convenient. And then it's go time as they're attacked by 'crawlers- oops there goes Randa. Things are going to shit, predictably. Ooh they have a flamethrower- where'd that come from? Oh wait... no they don't, he's history. Bullets clearly have no effect, but fuck yeah Weaver is on the case, using a lighter to ignite some gas (or something) and blow up a 'crawler. Yes!

So they're splitting up now. Packard is hell-bent on killing Kong and Conrad wants to get everyone to the boat. Packard's team starts setting off napalm to attract Kong, while Coneaver (yes I'm giving them a ship name) have a face to face encounter with the big guy himself, and Weaver touches him. You know, I like this spending the whole movie on the island, unlike previous versions where they capture him and take him back to civilization and all that. Anyway Coneaver decides to save Kong, and we have a showdown after Packard's plan (mostly) works. Kong is down and everyone's pointing their guns at each other, and Weaver tells Packard to stop and he's all "bitch, please." Then... the big skull-crawler arrives, everyone runs, and Kong kills Packard just before Packard can blow him up. Finally. I seriously need a break from Samuel L. Jackson in all the movies.

It's getting good now! Kong vs skull-crawler, and just in the nick of time too, because 'crawler was about to off our people. Weaver's up on a cliff shooting the flare to attract help, and Conrad and the remaining soldiers are trying not to die while the monsters scrap it out. Kong's in trouble though, but hey Brooks to the rescue, with the boat/ plane's big gun! The 'crawler's pretty tough, but Kong gets back in the game and manages to take it out, although Weaver gets knocked in the river for her trouble. She did shoot the 'crawler with a flare though, so she's like the MVP of all the humans in this movie. And of course Kong fishes her out of the drink because they have a connection or some such. Whatever.

I was wrong! Three military guys made it! I still don't know all their names but who cares? And the movie ends with like old movie footage of Marlow arriving home in Chicago and being reunited with his wife and the son he's never met. That was kinda nice. Oh and like a Marvel movie there's an after credits scene. Conrad and Weaver are being held at a Monarch facility and Brooks, along with San, inform them that there other monsters out there, not just Kong. And they're shown footage of cave drawings depicting Godzilla, Rodan and Mothra. And... a three-headed monster, which must be King Ghidorah. So that's apparently happening. And the movie ends with Godzilla's distinctive roar.

So... that ended on a bit of an exhilarating note. More monster goodness to come, apparently. And the idea of seeing Ghidorah, with today's technology, is pretty exciting. Time will tell if Legendary's monster-verse gets off the ground, but hey there's potential. But as for this one... yeah it kinda does suck in terms of the lame dialogue and the horrible Samuel L. Jackson nonsense- and Coneaver didn't have enough to do besides running and shooting- but it's also not bad as action movies go. I'll give it a toss up. Does it suck? Well, kinda yeah, but it was better than Tremors?
Posted by Greg at 12:00 AM