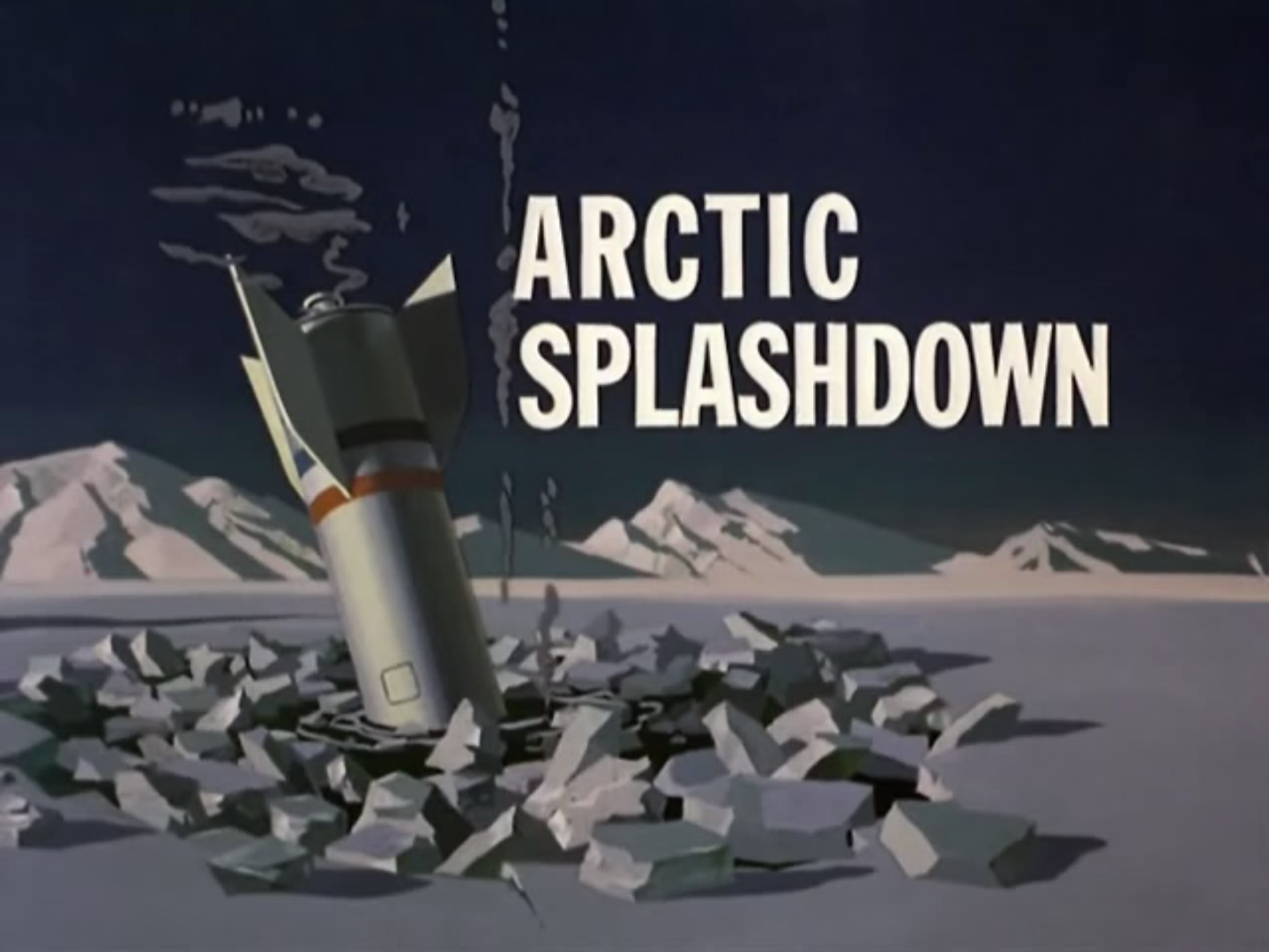 Arctic Splashdown is the second episode and starts off in a lighthearted manner with polar bear cubs at play in the frozen north. Their play is soon interrupted, however, by an errant rocket that crashes into the ice. The rocket apparently went off course due to the meddling of a foreign power, and Dr. Quest is already on the case. One of his colleagues warns that others may be trying to reach the rocket first, and that he'd best be careful, and to accentuate that possibility we see a submarine en route to the crash site- a sub filled with nefarious characters, naturally. What's more, the sub crew are aware of the Quest expedition and receive word from their base that the Quest ship will be destroyed. Guess they're not playing around.

We have the usual hijinks with Bandit before the action starts, and in addition to a polar rover we see that they have a skimmer for quick trips back to the ship. Why do I think that will be crucial? Good thing for the Quest expedition that they have air support, since an unidentified plane tries to missile them, and then the evildoers' submarine fires a torpedo at the ship. Luckily for the Quests' the bad guys are incompetent, as their torpedo hits an iceberg instead of the ship. Idiots. Later that night the sub surfaces and an assassin is dispatched to kill Dr. Quest, but fails. They're not very good at this?

The lookouts on the Quest ship aren't very effective either though, as our assassin once more approaches the ship, and this time drops a bomb on board. Luckily Bandit has his shit together and barks a warning, bringing the bomb to Race Bannon. Race of course promptly hurls the bomb away, where it rather conveniently hits the ice and rolls right into the assassin's raft, blowing him up. Right. The bad guys give up and instead break through the ice with their submarine, to get the missile before the Quests do.

The next day the Quests set off in their ice rovers to retrieve the missle, but find their way blocked by a walrus. Race says they can't go around it- why not???- so they try to nudge it out of the way. I feel like PETA would disapprove if this were a modern cartoon. Anyway Race assumes that Dr. Quest doesn't want him to shoot the animal- um, that would be correct- so Jonny manages to shoo it away by yelling into a bullhorn. Why do they have one along? It's a mystery. At any rate they reach the missile and find it intact, and the military personnel with them build a catwalk to reach it. This happens offscreen and I imagine involves a bit of work, but whatever. Meanwhile Race and Jonny take the skimmer for a ride- why?- I guess just to have fun while grown-ups work, and meanwhile the villains are observing from nearby. .

Race and Dr. Quest are captured once the military escort leave (where exactly did they go?) but the boys are still free- and remember those polar bear cubs? Yup, Bandit is chasing them, but flees back to Jonny when he encounters the mother bear! Jonny then sees a seal and decides to catch it- because why not, the local wildlife has nothing better to do than provide amusement for a couple of asshole kids, right?- but the seal mother objects and Jonny ends up in a snowbank. Ah fun times. They're not gonna last though, as the bad guys show up and capture Jonny and Hadji.

Hadji escapes though after judo throwing his captor, and takes off in the skimmer. I knew it. The submarine launches a plane (huh?) and the race is on!  Unfortunately Hadji is recaptured after a game effort, and the boys are thrown into captivity with Race and Dr. Quest. But not to worry! Dr. Quest lets on that he armed a destruct mechanism onboard the missile before they were hauled away- he's got a surprise planned for the bad guys. Only problem is, the bad guys need his help with the parts they're trying to steal, and take Dr. Quest back aboard the missile. Oops.

Not to worry though, Dr. Quest breaks free and runs for it. And then in one of the more ridiculous things I've seen, even in a cartoon, he slips and is about to fall in the water, but a killer whale happens to come by and shatter the catwalk, helpfully sending Dr. Quest flying onto the ice. Convenient! The bad guys of course can't hit the broad side of a barn so they shoot at the doctor for a while til the missile blows. Game over.

You know, I can't see taking your kid into a danger zone like this, but I know it's a cartoon. And Jonny takes the skimmer for a spin on the way back- it goes 100 mph by the way- yeah nothing bad will happen there. At any rate this one's over, and honestly- it kinda sucked? Not as good as the premiere, and I hope the third one is better. Hadji did appear in this episode though, after being absent the first time around, and he adds a welcome dimension to the cast- someone Jonny's own age. This episode also put me in mind of old Cold War thrillers like Ice Station Zebra, with the whole polar setting and submarine bits. Still, not a very good one.

I give this one two stars.