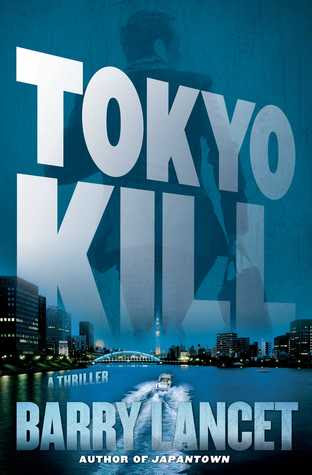 Tokyo Kill is a thriller about an American in Japan hired to protect a man who fears for his life. The protagonist co- owns a private investigation firm in the Japanese capital and also runs a high- end antique store back in the States. He's had run-ins with dangerous elements before and although this is the second book in a series, I didn't feel particularly out of water for not having read the first. I saw this one over at Bea's Book Nook a while back and the cover and the premise drew me in

Jim Brodie is hired by a man who is a veteran of the Japanese army and served in China during World war II. Someone is killing other survivors and it appears to be linked to atrocities that were committed during the war. Brodie takes the case and assigns protection to the man- but not even a day goes by before someone is found murdered, in a particularly gruesome way. Chinese gangs called the Triads are seemingly implicated, but as Brodie digs deeper he finds that the truth might be more complicated- and terrifying- than that. The PI soon finds his own life in danger, and the story takes a few twists and turns vefore we find what's really going on.

Most of the action takes place in Tokyo, but there are a couple other locations we visit as well. The pace is taut and the author is well versed in Japanese history and culture, and this plays a large role in the story. I enjoyed this story for the most part, the protagonist is engaging and the glimpses into Japanese culture were interesting. There is a bit of a romance with a Japanese policewoman, which was a nice touch, and I would have liked to see a bit more of her.

If you like thrillers that are fast paced and have a bit of an edge this would be a good choice.
Posted by Greg at 5:30 AM