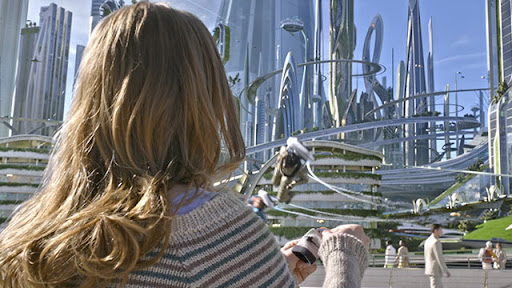 Tomorrowland is a movie about hope. Casey Newton (Britt Richardson) is a girl who knows how things work- she's bright and spend her time sabotaging the nearby dismantling of a Cape Canaveral launch facility, which will leave her dad unemployed. A mysterious girl observes her, and leaves a pin for her- a pin that will transport her to Tomorrowland, a futuristic utopia where the brightest work to make the world a better place. After she is arrested at the launch site, she uses the pin to visit Tomorrowland- and later meets Frank (George Clooney), a genius who went to Tomorrowland as a boy and was later banished. Together they will return to Tomorrowland, to find that much has changed- and to save the world, they will have to work together to set things right.

The biggest problem with this movie is- not enough Tomorrowland. It takes us a while to get there, but when we do- wow. Very cool. An awesome futuristic city, with flying cars and jet packs and all manner of awesomeness. There's a scene where CAsey is exploring the city and sees divers going through suspended water pools- going down through pool after pool, until they get to the bottom- that was neat. There is so much imaginative stuff in the few minutes we get to see the city with Casey- but after that we don't get nearly enough time there. More please! If you've ever been to Disney World and felt your pulse quicken as you approach Tomorrowland (or any of the other worlds for that matter)- that's how it feels here, the imaginative scope of it. That's what I came to see.

The story itself almost seems secondary to the visuals. Brad Bird obviously wants is to think about the state of the world, to not just take as a given that everything is bad and has to be that way. It's a little heavy handed and preachy at times, as some reviews have pointed out- and with the reported budget of this thing being close to $200 million, one wonders if one could make the world a better place using that money to, i don't know, improve thing somewhere. Nevertheless, the best movie can inspire audiences, and there's something to be said for that.

I'm not saying Tomorrowland is a great movie. It's not- it's often average, clunky at times, and the villain is lame. I was expecting more from Brad Bird, director of The Incredibles, and George Clooney. There's not enough of Tomorrowland itself- but the end is nice, even awesome. As I said above, this is a movie about hope- about a better tomorrow, about the sense of wonder we all have as kids, and hopefully still have as adults. I loved the way it ended- just felt right. I'm not sure it's enough to run out and see this- but it is worth seeing, to remind us of hope. I personally want t ocome out of the theater feeling good- and that doesn't happen nearly enough nowadays. Walking out of this movie, I felt pretty good. Even inspired, perhaps. And shouldn't that be the point of Tomorrowland?