Star Wars Heir to the Jedi 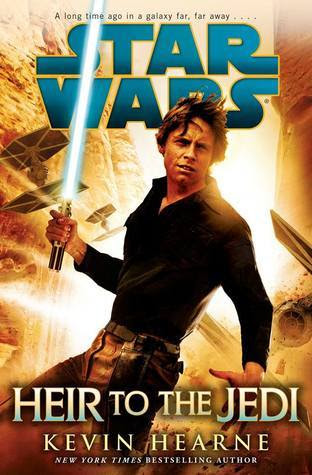 Star Wars Heir to the Jedi is a book set in the time between Star Wars: A New Hope and The Empire Strikes Back and told from the perspective of Luke Skywalker. The first Death Star has been destroyed, and Luke is sent on a mission to retrieve a cryptologist from Imperial clutches, as she wishes to join the Rebellion. At the same time Luke is coming to terms with the loss of his mentor, Obi- Wan Kenobi, and trying to figure out how the Force works and how to become a Jedi, with no one to train him. He teams up with Nakari Kelen, an attractive pilot who accompanies him on the mission, and they buzz around the galaxy on some side missions before going after the cryptographer.

The action starts quickly with Luke and Artoo heading out to secure supply lines (read smuggling) for the Alliance. I liked how it was stated that the Alliance couldn't survive without smuggling. The story careens from planet to planet as Luke and Nakari make their way into the Core Worlds, conduct their operation, and then get her to safety. Along the way they run into TIE fighters, Imperial cruisers and pirates- and also have to bargain for repairs on a windswept planet.

"She's a wanted ship now," I reminded her, but Leia shrugged it off.
"The Millennium Falcon is wanted everywhere. We just change the transponder codes and it's fine."

I haven't read a lot of Star Wars books, but this one was a blast. I like the first person perspective of Luke. His transformation from farmboy to the last Jedi was of course the whole point of the story. So to see him here in the early days of the saga, trying to find his way without Ben, was a treat. He doesn't have a clue how to the Force, something that  hasn't really been examined before in much detail.

The only real issue I have is it did seem a little unrealistic that Luke would go around using his real name , and no one sold him to the Empire. But other than that, I really enjoyed this story, the narrative voice felt like Luke and it was fun to gallivant around the galaxy. There's some nice humor in this one as well.
Posted by Greg at 2:00 AM