Tarzan and the Forbidden City 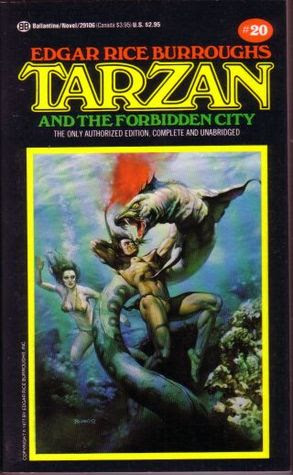 Tarzan and the Forbidden City starts with a request for help from a friend- Paul D'Arnot is helping a man find his missing son, and suggests that Tarzan may be able to assist. Tarzan meets with the man and his daughter, Helen Gregory, and agrees to help. Interestingly, Tarzan apparently looks a lot like the missing Brian Gregory- so much so, that some scoundrels nearby believe he is and try to accost him. Gregory was looking for a fabulous gem before he went missing, and the bad guys want his map- for it apparently shows the way to Ashair, the Forbidden City.

Later Helen Gregory is grabbed by Atan Thome, the ringleader of the bad guys. He demands the map in exchange for her freedom, but when Gregory tries to comply he finds the map missing. Stolen! So Thome keeps Helen, and plants a spy in the Gregory safari- his accomplice Magra, who is in love with Brian Gregory. There is also another plant in the party- a hunter named Wolff, who has been told by Thome to lead them astray. Together Magra and Wolff are to derail the Gregory safari, and meet Thome in Ashair. Oh, and Wolff stole the map. Looks like the bad guys have the upper hand-- but wait, D'Arnot knows there is a naval seaplane in town, and they can beat Thome to where is going. Off they go- but alas, they fly into a storm and have to go down.

"What's wrong?" demanded Wolff. "The engine isn't running."
"You have answered your own question," said D'Arnot, walking back to his seat.

They come down in a lake, and proceed to track Thome, who is now way ahead of them. Helen Gregory escapes Thome, only to fall into more misadventure. The story proceeds from there as both expeditions seek to reach the Forbidden City first- and claim The Father of Diamonds.

I liked this story a lot- it has the usual coincidences and eye rolling moments, but it's a fun romp. The party dynamics are interesting as well, as Wolff lusts after Magra but is rebuffed, and D'Arnot falls for Helen. Burroughs' romances are instalove all the way, but there is a certain charm here, especially as D'Arnot and Helen face danger together. There are plenty of hair raising escapes and the underwater temple is a nice touch- I think this is one of Burroughs' better outings. The moment towards the end where Tarzan must battle underwater, amidst a strange and beautiful marine garden, to rescue Helen from sacrifice is a keeper. The pace is breakneck, especially at the end- perhaps too much so, with captures, recaptures, and escapes, underwater grottoes, forgotten cults- this one has it all. And when The Father of diamonds is found- what a surprise.
Posted by Greg at 2:00 AM