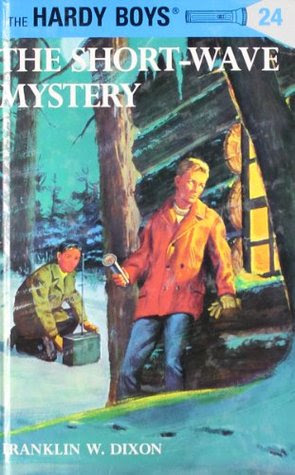 The Short Wave Mystery is this weeks foray into the Hardy boys stories, and it's a good one. The Hardys are spending some time with their short-wave ham radio when then hear a garbled message- perhaps being scrambled? Their suspicions are aroused but before they can give it much thought, they are contacted by their pal Chet Morton, who has taken up a new hobby- taxidermy. Chet has a habit of taking up new hobbies- and they often factor into the mysteries. Chet asks them to come to an auction with him, where some taxidermy stuff will be up for sale, and they agree. True to form, the plot picks up quickly, and at the auction some thieves make off with some of the exhibits. They practically run the boys down in the process. Naturally they give chase, but the perps get away

Their dad then comes home from Europe and reports that his current case is industrial espionage- someone is stealing commercial aircraft secrets that could have military applications. And guess what - there's a link to taxidermy. No way! Shortly afterward the boys are asked investigate the theft of the exhibits. Later when the boys are listening to their ham radio they hear a coded message- could it be the gang their dad is after? As the story progresses they hear more coded messages which gives them valuable clues. The espionage and theft are related, and as the boys trace the clues down they find themselves in more dangerous situations, culminating in a trip to Canada and a showdown at a remote hunting lodge. I thought this was a nice touch, and provided a tense conclusion to a fine story.

I liked this one quite a bit, it has the usual coincidences and unrealistic elements,but I think this is one of the best ones I've read. I especially liked the short-wave radio element. I remember this when I was growing up, and thought it would be neat to do ham radio stuff. So this probably appealed to me as a kid, and still does today. There's a lot of old time goodness in this one, actually. Stops at diners, old fashioned family values, the kids are respectful, and it's just a very comfortable read. There's also a lot of food in this one- the boys' Aunt gertrude is constantly whipping up something for them to eat, and they're always having cocoa and cookies it seems like. There is some good chow going on at the Hardy household! I enjoyed this one a lot, and it has a lot of fun stuff going on.
Posted by Greg at 12:00 AM