The Secret of Pirates Hill 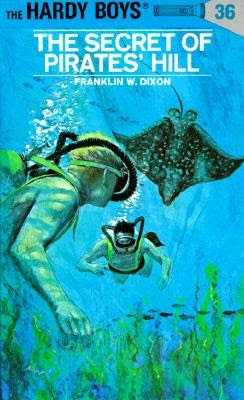 The Secret of Pirates Hill has the  Hardy boys in search of a lost treasure off the coast of Bayport- near a sandy dunes area known as, you guessed it, Pirates Hill. This one starts off with a bang, as Frank and Joe are skin diving when another diver shoots speargun at them. Frank is nearly killed and they return to Bayport, where they are approached by a man who wants to hire them- to find a cannon. He offers them a thousand dollars to find it. Frank is skeptical of the man and his offer, and sure enough when their dad checks on him he finds that the man is a fake. He may also be involved in a swindling case that the elder Hardy investigating. Mr. Hardy advises the boys to stay friendly with the man, to earn his trust- it amazes me how he encourages the boys to put themselves in danger.

The girlfriends show up early in this one. They are all supposed to have a fourth of July beach party, complete with a clambake.

Fourth of July arrives and as they prepare for their beach party another man in a boat warns them off, telling them he saw a stingray in the area. When they see someone else in the man's boat they get suspicious and try to get close, but the boat takes off. They have their feast on the beach, and everyone is enjoying themselves but Joe sees someone on the hill watching them.

The boys put together that one or more parties are looking for an old treasure in the Pirates Hill area. They soon find a message written in Portuguese that gives a clue as to the location, and they are off. They find a suitable place to dig, and after some help from an old timer who lives out there, they hit the jackpot. They also discover that a cannonball fired at the right angle will show the location of the treasure. They prepare to dive after the treasure when someone tries that, obliterating their pal Tony's boat. They survive but Tony's boat is history. All that remains is to find the treasure. Maybe Tony will get a new boat after all.

I didn't like this one as much as The Short Wave Mystery (reviewed last week), in spite of an interesting premise this one felt just average. As usual the small touches- parties on the beach, the time spent with friends - the world was different when these were written, simpler perhaps- and I am enjoying them for that. The mysteries for me are not even the draw, instead I am enjoying the glimpse into a different time, and enjoying the interactions between the friends.
Posted by Greg at 6:49 AM