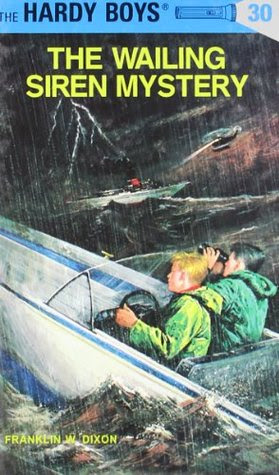 In this installment we start off with the boys on a boat ride when a storm comes up. Their motor gives out and while they are trying to fix it they see a yacht in the distance. They send an SOS but get no response. Shortly thereafter a helicopter appears, and they hear a wailing siren. Something is dropped in the water near them, and when they fish it out of the drink they find two thousand dollars in it! The boys report it to the police, and place an ad in the paper mentioning the money has been found, but not how much.

In the midst of this their friend Chet shows up and mentions that his truck has just been stolen. Unfortunately it was full of his uncle's high powered hunting rifles, as well as camping supplies that Chet had purchased for an upcoming camping trip. Oops. Chet left the keys in the truck. Smart. The Hardy's manage to track down the truck, but the loot is gone. The boys are thinking about how to find the stolen items when Frank goes to see if there has been a response to their ad. Turns out there has. Someone dropped off a note telling them to hang onto the money pending further instructions -and it's signed Rainy Night. Ah ha! The game is afoot.

Frank notices as he leaves that he is followed, and later they find glasses under a window at their home- someone has evidently taken an interest in them. That evening Frank is abducted while heading to his girlfriends house, and a cage arrives with two carrier pigeons. Apparently this is how the money is to be transported. Okaaaay. Frank, meanwhile, manages to free himself and once reunited, they release one of the pigeons and attempt to track it, but are unsuccessful. At this point they find out that their dad's current case involves missing money and possible gunrunning to Central America, and they think that perhaps this is related to the two thousand dollars they found. Coincidences like this are the stuff of a Hardy Boys story!

The boys then go camping in the North Woods, the area where they suspect Chet's missing items are stashed. It's also where Frank was held when he was kidnapped- so it's kinda bizarre that their dad encourages them to go there, after Mrs. Hardy remarks that she would like the thugs to not know where the boys are. Yeah- send them away to a dangerous area! So Frank, Joe and their friends Chet, Biff and Tony head into the woods. That night they are awakened by a wailing siren. Hmm.

They soon put together that something has been happening at sea with the yacht and helicopter, and so they head back out. They are followed and attacked, and from there we get a thrilling boat chase and a showdown with the gunrunners, and their dad shows up to save the day at just the right time with the state police. This  one was good- not the best I've read, but it has its moments.

The cover on this one is probably one of my favorites.