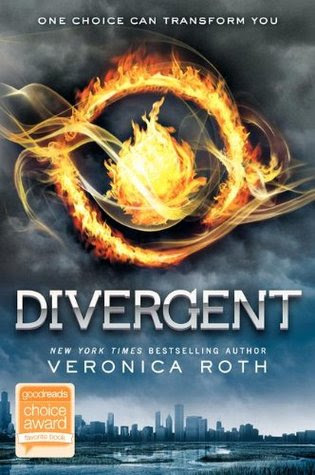 Divergent has been reviewed probably a zillion times, so not sure what I can add to it, but here are my thoughts. I really liked this book, it was engaging and fun and a little thought provoking. I saw the movie first so that no doubt colored my perceptions a bit, especially as I visualized certain characters- I thought the movie captured the gist of Tris and Four very well, as well as Eric and Jeanine.

Tris has been raised in a faction that values selflessness above all- her faction along with four others form the basis for society in a future Chicago. Everyone must make a choice when they turn sixteen- they must choose the faction they will spend the rest of their life in. They can choose any faction they wish, or remain in the faction they grew up in- but once they leave, there is no going back. Society helps with this decision by administering aptitude tests, to help each person know where their strengths are, and therefore which faction would be a good fit. Occasionally however, someone tests as Divergent- meaning they don't fit just one faction, but potentially several. Usually it's two, but Tris shows aptitude for three factions.

She is told to speak of this to no one, not even her family. The next day Tris must choose- and she chooses Dauntless, the faction of the brave and the protectors of the city- to the shock of her parents. Tris isn't really prepared for what Dauntless will require of her however, and she begins a brutal initiation process that will test her strength of mind and body. She meets Four, one of the instructors who has secrets of his own- and there is a mutual attraction. Four sees in Tris a mental toughness that he respects, little knowing that they share things in their backgrounds that could bring them together- or tear them apart. As Tris navigates the minefield of dauntless initiation and learns the secrets of her faction, she realizes that not all is right with her society- trouble is brewing and anyone who is Divergent will be targeted as too dangerous to live.

I like the idea of the factions a lot, although I'm curious what happened to the world to bring this about, and also if it's just Chicago that is like this or if there are factions all over. I'm sure this is addressed in the next two books. The different groups, with their own symbols and values, were one of my favorite parts of the book.

Divergent was a good read, entertaining and provacative. It would really be tough for a sixteen year old to make a decision like this, whether to stay with their parents or choose an all new life. When Tris thinks she doesn't know what she believes, I think that's totally understandable at her age. In the real world of course, kids around that age or a little older are already starting to make their own way, to discover what they believe or value- ultimately they have to make their own choices- and in the world of Divergent the choices come a little sooner and are more stark and final. It's not really an option to be an undecided major in this society! I enjoyed that aspect of the story much more than the action- and I look forward to discovering more about this world, and the choices Tris makes.

You can see my movie review of Divergent here.

For those who've seen the movie or read the book- some additional thoughts. There are a few mild spoilers below, so just a heads up on that. Let me know what you thought of the book or the movie- do you think the movie did a good job of bringing the book to life?

I liked Uriah and MArlene and hope they made it through okay. I felt a little guilty for enjoying it when Tris beat the crap out of Molly- but not too guilty. And I thought the romance between Tris and Four was handled pretty well (although I think the movie actually did a better job of that). I'm generally one who likes the book better than the movie, but there were a few things about the movie I actually liked better. I thought the capture the flag sequence in particular was better in the movie, a little more in depth and action packed as they infiltrated the other team.

Thw whole concept of Divergence, while interesting, is a little problematic- what exactly is it about being Divergent that makes them resistant to mind control? How can their brains be THAT different? But I still liked it, and am anxious to see where things go from here.
Posted by Greg at 4:46 PM