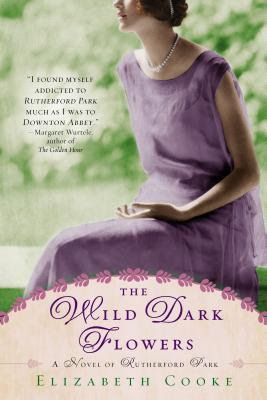 The Wild Dark Flowers by Elizabeth Cooke is the follow up to Rutherford Park, one of my favorite books of last year. It is the story of William and Octavia Cavendish, their family, and the servants at their great country estate- set against the backdrop of World War I. William is still coming to grips with the fact that his wife is in love with another man, and Octavia remains at Rutherford only for the sake of the children. Their son Harry is with the Royal Flying Corps in France, but he has seen the reality of war and no loner views it in a romantic light. Louisa is still recovering from her fling with a rake, and this has caused her to mature, but also has shattered her confidence. Charlotte is a free spirit and wants to live, to try new things, and like her mother is less tied to the old ways and the restrictions placed on her.

William has grown in some ways since learning of his wife's affair, and yet in other ways he is the same man. Tied to tradition, not sure how to change or to open up to Octavia,  he fears she will leave but doesn't know how to stop it. Octavia, for her part, is torn between loyalty to her husband, whom she respects but does not love, and the American she fell  in love with the previous year. She feels stifled by Rutherford, and while she realizes she is fortunate to have her position, she wants the freedom to travel, to be free and find her own way.

This is a story about the horrors of war, specifically WWI and some of the awful things that happened there, as much as it is about a country house and the family that lives there. This is both a strength and a weakness to my mind. I knew the war would play a role, as it was the backdrop in the first book as well, but I wasn't expecting it to play such a large role. I suspect this was a very personal book for the author, and I respect that, it just went in a different direction that I was expecting- I was looking for something similar to the first book, a country house drama with real events as a backdrop, and here the war kind of takes center stage and overshadowed everything else for me.

This book ends on a serious cliffhanger, which I didn't see coming This plot twist didn't really work for me, it seemed too unlikely- and to top it off, the preview for the third book gives away the aftermath of the cliffhanger, so you know what happens just not the details. I found this a little annoying, and much preferred the way the first book ended- it was self contained, a sequel clearly possible but the story was complete in itself as well. The characters were not as compelling for me this time around as well. This is well written and powerful at times, but it didn't move me like the first one did. I would recommend reading Rutherford Park, and if you enjoy that novel and want to continue the story, by all means read this as well, but for me this didn't rise to the level of the first one.
Posted by Greg at 4:53 PM