Review: The Cats of Tanglewood Forest 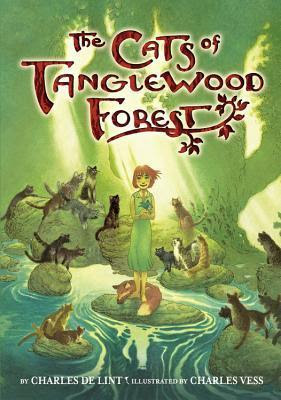 The Cats of Tanglewood Forest tells the story of Lillian, an orphan girl who lives with her aunt on the edge of the sprawling forest. She spends her time after chores roaming the woods and looking for fairies. But try as she might, she never sees them although she can sense they're there. She's a generous soul and loves the animals, leaving saucers of milk for all the stray cats and even taking biscuits to the old apple tree every day, for the Apple Tree Man that she imagines lives there.

One day however after venturing deep into the woods Lillian has a terrible accident... and the cats come. Saving her as only they can, Lillian is transformed into a cat. Thus begins a quest to return her to her proper form- but along the way she will meet some unforgettable characters (the fox known as T.H. Lawrence steals every scene he's in) and learn some valuable lessons about love, loyalty and the consequences of decisions.

I loved this book. It has a fairy- tale quality to it, an ageless feel. Lillian is a classic free spirit, eschewing shoes and girly things and wanting nothing more than to wander free in the woods and race the deer. She's feisty and loyal and brave, but learns that the forest can be a dangerous place as well as enchanting. Will she find a way to set things right and return to her true form? And will she ever see the fairies?

The Cats of Tanglewood Forest is written by Charles De Lint and illustrated by Charles Vess. Both are World Fantasy Award winners. I've never read De Lint before but I've been a fan of Charles Vess' work for years. He has collaborated with Neil Gaiman on Stardust and other projects. I've seen his work in various comics and he is the perfect artist for a story like this. He has a lush style, so evocative and dreamy. This is not my favorite example of his art, I've seen a lot of his stuff over the years, but it's still so good. I just love the cover.

I highly recommend this book for kids and adults alike. I think kids will love it, but I also think it has a lot to offer adults. The book reads quickly, some pages are full page illustrations and the ending is awesome. I haven't had this much fun with a book in a long time.

Charles Vess' website Green Man Press can be found here.
Posted by Greg at 8:07 AM