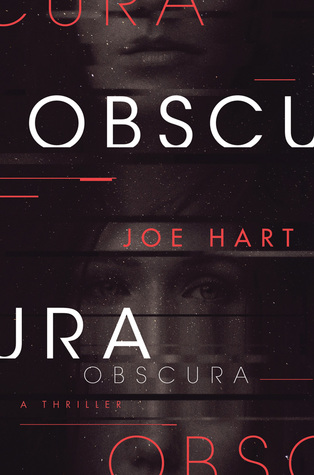 Obscura is a trip (and if you've read it you'll appreciate what I mean). Bad jokes aside, this was a nice surprise of a book, and a compelling read, with a neat take on a cool concept that I cannot divulge, due to spoilers. Suffice to say that it's mind- bending, thrilling and quite the read. Gillian Ryan is a world class researcher looking into a new dementia, and when NASA recruits her for help- it turns out that crew members aboard a space station are having similar problems- she has no choice but to accept. She lost her husband to the disease, and now her daughter is showing symptoms, and NASA makes her an offer she can't refuse. If she helps them, she gets unlimited funding- and a chance to save her daughter.

The catch of course is that she has to go into space and, you know, survive. She also has an opioid addiction that does not help matters, especially when things go wrong (and do they ever go wrong). It will probably surprise no one that there are secrets here and she has not been apprised of everything, so when things go south she learns quickly how in over her head she is. There are some truly chilling moments as the author explores addiction and its effects on people in high stress environments, and mixed in with the science fiction elements, it really makes for a spooky read at times. You might want the light on when you read this!

Gillian at times doesn't know what's real and what is not, and the reader doesn't either, which really ratchets up the tension. I thought this started a little slow- there's some necessary groundwork to be laid- and the middle of the book sort of drags on a little even though the aforementioned paranoia and psychological stress are off the charts. I mean part of the journey here is the trip to the space station, and I suppose I assumed they would arrive sooner, but once they do hello! Things really get crazy then.

Addiction, paranoia, the question of how much we can ever really know someone, as well as questions of mortality and memory are all addressed here, and very effectively. A thought provoking book and an absolute thriller at the end. The body count gets pretty high and while I sort of thought this might be a space zombie book, based on my reading of the blurb, it's really not- although if veers close to that. And I had a theory about what was happening, and while I was wrong it was super fun to speculate about the true reasons behind the dementia- and what made the victims go crazy.

So this starts a bit slow, gets very twisty and chilling in the middle, and by the end is a train ride through crazytown. And in a good way. I was completely hooked by the end and was very invested in the characters, especially the main ones, and the ending was perfect.
Posted by Greg at 7:45 PM