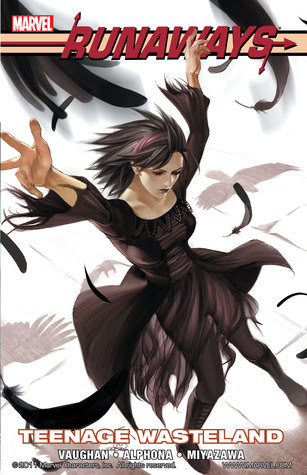 Runaways Vol. 2 Teenage Wasteland picks up right where the first volume left off- the kids are in hiding and their parents are trying to track them down. However one of the kids is apparently a mole, having left a note for the Pride that they are loyal to the parents. But who is it? The bulk of this volume deals with the aftermath of the kids leaving their haven- the first time they run afoul of a vampire and the second time they run into Cloak and Dagger. Both times the kids are struggling to use their powers- at one point Nico ends up summoning pelicans of all things to foil a robbery- and the humor from the first one continues also.

I liked this one a little less than the first one, and the timeframe of the book is a few days, so not a lot happens, but it's still an interesting story. You have the advantage of the Marvel universe as a backdrop, so you can have vampires or whatever strange foes you want, but at the same time the Avengers are not coming to save the day. It's a street level story far removed from the usual hero stuff. The highlight of this one for me was probably the two part Cloak and Dagger story, which I thought was done well- it was interesting to see some of the kids shunted off to the Darkforce dimension, another plane of existence that has a long history at Marvel.

But getting back to Runaways. The vampire storyline was kinda good and we continue to get hints that Molly is actually very powerful- her mutant abilities are just starting to manifest and she saves the day a few times. As the youngest member of the group (she's eleven) that's an interesting dynamic. I like Gert's psychic velociraptor, and the fact that Karolina is from another world is also an element I hope they delve into. There's a lot of potential here, and I have suspicions as to who the mole is - but time will tell.
Posted by Greg at 2:39 PM