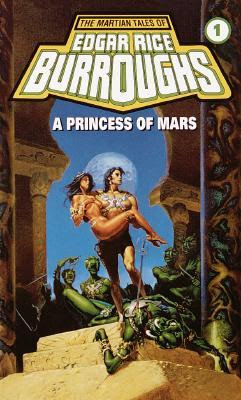 A Princess of Mars is the first in the John Carter series by Edgar Rice Burroughs. Written in 1912, it tells the story of John Carter, a gentleman and Civil War veteran from Virginia who finds himself transported to Mars. Alone on a world of dead sea bottoms and strange creatures, he is soon captured by Tharks, the great green warriors who roam Barsoom (as they call Mars) in great rampaging hordes. Carter finds that his swordsmanship, combined with an extraordinary agility owing to the lesser gravity on Mars, gives him a great advantage over the natives, and he soon earns a respected position among the warlike Tharks.

Then Dejah Thoris, the beautiful princess of Helium, is captured by the Tharks and Carter risks all to protect her. This earns him the enmity of the Tharks, and soon Carter and Dejah Thoris must flee in an attempt to return the princess to her home. Carter of course falls in love with her almost immediately, in typical Burroughs fashion, and we have the usual misunderstanding due to his ignorance of Martian customs. Carter has a friend among the Tharks however, the honorable Tars Tarkas, and when the rival nation of Zodanga threatens Helium, Carter and Tarkas must risk all to save Dejah Thoris.

A Princess of Mars kicked off the subgenre of science fiction known as sword and planet, or sometimes interplanetary romance. Invariably this formula involves a man transported somehow to another world, where he meets the most beautiful woman imaginable and (of course) wins her hand, having found his true home. He is usually an expert swordsman as well, naturally. I read these as a kid and was enthralled, although the series seems to drop off in quality as they go on (the first five are generally considered the best, although I would really only recommend the first three).

A Princess of Mars has swordplay and love in the face of hopeless odds, loyalty and betrayal, airships and atmosphere plants, savage monsters and exotic cities beneath the twin moons of Mars- it is a true science fiction classic and a fast read. It has aged somewhat as the writing style is wordier than we're used to nowadays, but if you want to read the book that probably launched a thousand others, this is the one.