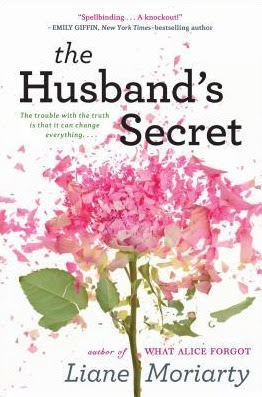 The Husband's Secret is the second book by Liane Moriarty that I've read. After reading Big Little Lies I was determined to read more of her work, as I enjoyed that one so much. I was happy to see that many of the elements I enjoyed from that book were here as well, not least of which the authors knack for engaging dialogue and her thought provoking themes. This is a book that will make you think, and there are no easy answers to some of the dilemmas posed.

Moriarty does some interesting things here. The basic plot is that Cecilia Fitzpatrick, the got-it- all -together mom and head of the parents association at school, finds a letter that her husband, John- Paul, left for her to read after his death. She is at first conflicted on whether to open it, and does not do so- until events force a change in her mind. And of course after she opens it, everything changes. But not just for her and John- Paul. Moriarty weaves in their lives along with the lives of other, seemingly unrelated people- and by the end, everyone will be drawn in together. almost like waves rippling when you drop a stone in water- actions taken (and events from the past) reverberate and change lives forever.

The story also concerns Tess, who contemplates divorce after her husband and cousin admit to an affair- she has to weigh the well being of her child with her desire to leave. And Rachel is the mother of a girl who was killed years ago- and the man she suspects of doing it works at the school where cecilia's children go, and where Tess enrolls her son after leaving Melbourne for sydney. They all come together and leaves marks in each others lives, and secrets are slowly revealed. The husband is not the only one with secrets- and the themes of regret, forgiveness, and how well do you really know someone- spouse, lover, etc- are examind here.

I didn't like this one quite as much as Big Little Lies, but it's still a fabulous read. It's a little heavier I think, there's still Moriarty's wry humor but the subject matter is almost depressing at times, or so I thought. Lies was a more enjoyable read in that there was almost a delicious snarkiness to it, for lack of a better word, even though she explored thought provoking themese there as well. But many of the things I loved about Lies are here- the well drawn characters especially. Cecilia reminded of Madeline a bit, a character I really enjoyed in the other book, and the same structure isused- three women whose lives intersect in interesting ways.

I highly recommend The Husband's secret for anyone who wants a good read that will make you think about some of the things we take for granted. Everyday life sometimes drifts along until something happens to wake us up, or shake our lives- and I was fascinated by the what ifs of this book. The epilogue by the way really gets you thinking as if gives some insights into those very things. And I really like how the author lightly satirizes some of the mundane aspects of life. I will probably read more of her work, as both of my experiences thus far have been fantastic.
Posted by Greg at 4:05 AM