Murder in the Paperback Parlor 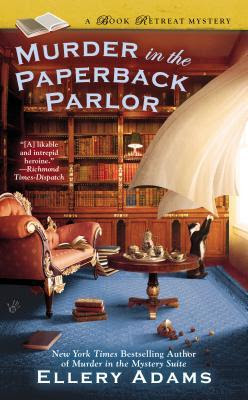 I've been anxiously waiting for this one ever since I read the first book in this series, Murder in the Mystery Suite. Ellery Adams is a new to me author who writes several series- I'm currently reading these as well as her Books By The Bay series. The premise here is a resort that caters to book lovers- there are rooms named after literary figures, and several (!) libraries. I know, right?

Jane Steward is the owner of Storyton Hall, a rambling stone manor and hostess of a book lovers retreat. In this one she is planning a Romacing the Reader week- a Valentine's Day event that will bring several famous romance writers to the resort for all kinds of fun activities. The problem is, there is bad blood between two of the best selling authors- and when one ends up dead, there is no shortage of suspects. The dead author dropped advanced reading copies of her latest book and the reaction among the many fans was not positive- several threats are heard against her and the atmosphere turns tense very quickly.

The other thing going on is Jane's role as guardian of the secret library. As we learned in the first book, Jane and her ancestors are dedicated to preserving many old manuscripts, unpublished Shakespeare plays, and the like- a priceless collection of literary treasures. The top staff members of the resort are highly trained and are devoted to keeping Jane (and the library) safe. It's fun to watch the very proper and stiff butler Butterworth, and Sinclair go about their business while at the same time running a resort- wide surveillance network and investigating guest. There are secret passages amd hidden rooms and lots of intrigue- a fun concept.

There a re a ton of literary references here, and I enjoyed this one more than the first volume. Jane is more assured and settling into her role as guardian of Storyton Hall. The supporting cast is lightly developed in this one, but there is a subplot regarding the newest member of the team. I don't think the Cover Girls reading group is nearly as developed as the reading group in the author's Books by the Bay series, but then they don't play as large a role in the story as that group does. And Jane herself grows as a person in this one, as she has to juggle her new responsibilities with a burgeoning love interest. You don't need to read the first one to enjoy this one- I was a little fuzzy on the first one but she tells you everything you need to know.

There's also a hint at the end that there will be a third book- something to do with medieval herbalism. Okay at this point Jane should probably stop having event weeks- but if she keeps having them, I'll keep reading them.
Posted by Greg at 5:00 AM