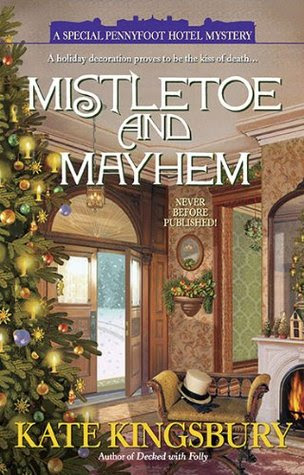 Mistletoe and Mayhem is a Pennyfoot Hotel Christmas story. Cecily Sinclair Baxter runs the Pennyfoot hotel on the coast of England. It seems that every year there is a murder (or two, or more) on or near the property, and Cecily has become rather adept at solving them. Her husband Baxter, of course, frowns on this but that does little to deter her.As this story opens Christmas is fast approaching and Cecily and the staff are busy making their last minute preparations. A new housemaid named Ellie has come on staff, and while she seems sweet, several of the servants realize there is more to her than meets the eye. She is heard arguing with someone and when her and the footman she was seen kissing under the kissing bough turn up dead, the place descends into chaos. Cecily is determined to solve the mystery before Christmas is ruined, but when the body count rises she may find that she has more than she bargained for.

The story is told from the viewpoints of Cecily as well as several of the servants, including the maids Gertie and  Pansy. Cecily has a support network of friends who help her parse the clues, and of course the servants are the ones who hear and see all sorts of things. The characters are likable and, for the most part, realistic. There are romantic subplots and a touching scene or two. This year there is even a special mystery guest in attendance, although the servants of course don't like him due to his reclusive nature.

I read this mainly because I read the latest book, Mulled Murder, last year around the holidays, and this year I felt like revisiting this cozy world. As others have pointed out, it's very unrealistic that there would be so many murders at the same place, every year- but then I'm reading these primarily for the characters and the setting. The nice thing about this series is that the recurring characters are charming and have problems and issues of their own- it's nice to share their triumphs and sorrows and get a taste of an old world Christmas at the same time. So it's definitely a comfort read and a chance to enjoy some down time in a charming setting.

This is a light cozy with a fun cast of characters and a nice setting. We have the ditzy, inept policeman and a few other predictable elements, but by and large this is an enjoyable read and I will probably get more of these. They're comfortable and there's something to be said for that- and this time of year, they're a great little read.
Posted by Greg at 4:07 AM