Review: All New X-Men Vol. 5 One Down 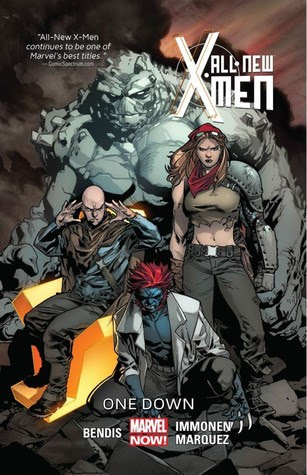 All New X- Men Vol. 5 One Down is a collection of issues 25-30 of the All new X- Men. It takes place after the events of The Trial of Jean Grey (which I reviewed here). The premise is that the original X- Men of the 1960's have been brought forward in time to the present day, in order to prevent calamity. The problem is now that they're here, no one knows how to send them back- and to make matters worse, a band of mutants from the future, calling themselves The Brotherhood of Evil Mutants, have come back in time to kill the original X- Men. Make sense? Well, it's X- Men so of course there is time travel and convoluted plotlines.

The original X- Men, accompanied by their mentor Kitty Pryde, have taken refuge with the outlaw band of X- Men led by present day Cyclops. His band have set up shop in the old weapon X facility, and the original X- Men are settling in after the events of The Trial of Jean Grey, but trouble finds them again. The Brotherhood from the future come calling and cut the power to the complex, and then use shapeshifting to impersonate various members of the group. The assault is interspersed with snippets of the future, where we learn more about the Brotherhood and what their goals are. Most of this book deals with the Brotherhood's assault and the aftermath, and then the last issue switches gears and tells a more intimate story. Jean and Emma come to an  understanding after a psychic showdown, and Kitty has a date of sorts (via hologram) with Star Lord of the Guardians of the Galaxy. Readers of the Trial of Jean Grey will remember that Kitty and Peter Quill met in that story and hit it off pretty well. This was a nice touch and I hope they continue to develop their long distance relationship. Fun stuff.

I liked that present day Cyclops and the young Jean had a conversation- finally! And afterwards Kitty warned Scott not to be alone with her again. That was done very well. Brian Bendis can write good dialogue, although it's often too wordy, but here he presents a very nice conversation that gets at several of the issues facing these characters. They have so much history between them, after all. I also like how this series, even though we're thirty issues in now, is taking its time with the story- will the original X- Men go back to the past? Are they stuck here? If so, does this change all the continuity- is everything new or possible now because of this de facto reboot? It's such a fascinating idea. Time travel and the consequences of it are at the heart of this story.

I thought this was a good collection, for the most part. The first issue is shaky- it deals with Hank McCoy (the present day Beast) wracked with guilt about bringing the original X- Men to the present, and learning that doing so may have screwed up the timestream. This is the weakest issue of the lot, and is further marred by some atrocious art. There is a sequence drawn by a bevy of guest artists, and the results are not good- it looks like a schoolkid drew the scene. Mind boggling, especially since comics are $3.99 a pop now. Other than that hiccup, the rest of the art throughout is good, and the story is good as well. A good read, and worth a look if you like the X- Men or just want a good story.