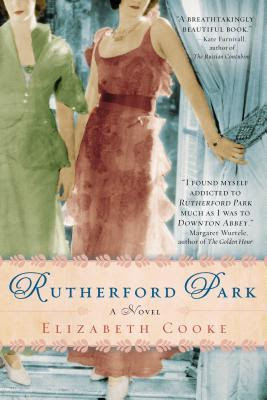 “Snow had fallen in the night, and now the great house, standing at the head of the valley, seemed like a five-hundred-year-old ship sailing in a white ocean.”

So begins Rutherford Park by Elizabeth Cooke, the story of a great country house on the eve of World War I. The story starts on Christmas Eve, when Octavia Cavendish, the lady of the house, sees her husband in an intimate moment with another woman. At the same time, her son Harry has seduced a maid, with tragic and far- reaching consequences. We are immediately drawn into a world where tradition and propriety are everything. William Cavendish is an earl and a creature of that tradition, proud and unbending, while his wife Octavia chafes under the restrictions placed on her as lady of the house. Harry has dreams of his own, as do his sisters Louisa and Charlotte. And underneath the surface everyone has secrets.

The story is told from the viewpoint of both family members and servants as lives change and the storm clouds of war gather on the horizon. William has a secret that may change their lives forever, and Octavia has to make a choice between duty and love. In many ways this is the theme of the book. Harry wrestles with guilt over his earlier indiscretions, unaware that he has a child in the world. The servants too must grapple with the changing times- some are anxious to embrace change, while others take comfort in, and are indeed defined by, their traditional ways. It’s a fascinating mélange of luxury and heartbreak, secrets and lies, set against the backdrop of a world plunging into war.

Rutherford Park is a phenomenal book. The characters are often achingly real, and the glimpses into the life of this period were fascinating and occasionally harrowing.

The last page was a joy to read, and symbolic of all the changes that have affected this family throughout the course of the book. Times are indeed changing, and it’s nice to see the family change as well to meet the challenges of the future. There’s a hint of redemption here and it was touching. There is a sequel in the works, and I will be reading it to see where the family, and indeed the estate, go next. If you’re interested in a story about family, love and duty you owe it to yourself to read this book
Posted by Greg at 8:00 PM