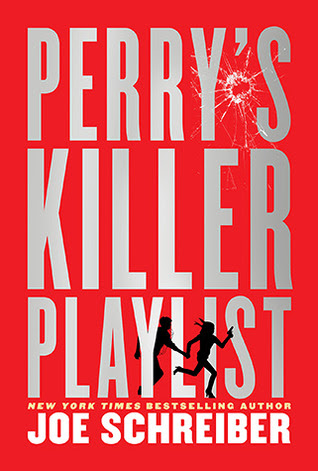 Perry's Killer Playlist by Joe Schreiber is the sequel to Au Revoir, Crazy European Chick- a surprisingly fun read about a high school student who is forced to take their exchange student to the prom- and discovers she is actually a lethal assassin with a list of targets in New York City. This book takes place 3 months after the events in Au Revoir- PErry is now involved with a slightly older woman, and his band has been booked to play dates in Europe... but of course, at some point Gobi is going to shop up, guns blazing. Remembering something Gobi told him- that if he was ever in Venice to look for her at Harry's Bar , Perry decides to take her up on that- and he is soon swept off into another adventure.

Once Perry and Gobi are together again the bullets fly and they careen from one crazy situation to the next. There are twists and turns and a few nasty surprises. The whole thing is wildly unrealistic at times but fun. The action never lets up, whether jumping off a fourth floor balcony in a Venice hotel or crashing a Santa Claus festival in Switzerland in the middle of a firefight- there's a breakneck pace to the story that doesn't let up. It's like a teen movie meets Bourne or La femme Nikita. Totally fun, and the descriptions are great too- really makes you feel like you're seeing what they're seeing.

Just as in the first book, the plot takes a more serious, somewhat darker turn as Perry finds out more about who Gobi is and who she works for.

You're basically not allowed to be bored reading this, and at 209 pages it's a fast read. The first book started each chapter off with a college essay question, and here the chapters are all preceded by a song that apparently has some bearing on the chapter (hence the title). The relationship is fun and a little touching at times- he is so in over his head, and Gobi, hardened assassin that she is, obviously has a soft spot for him even as she pushes the throttle down. This could easily be a series although I think plausibility will be stretched even further the longer it goes- but it's fun and I would buy a third one in a heartbeat. A fun ride.
Posted by Greg at 9:37 AM