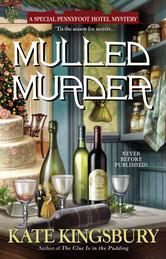 Mulled Murder by Kate Kingsbury is a Christmas themed cozy mystery set in in the Edwardian era. It is the last of the Pennyfoot hotel mystery series, although you do not need to have read any of the previous books to enjoy this. I bought this having no idea it was part of a series, and it was no big deal. The story starts off with a body washed up on a beach outside the Pennyfoot hotel. It turns out that murders and mystery are no stranger to Cecily Baxter, the owner of the hotel. The hotel is known for having strange going on, especially at Christmastime, no doubt a reference to earlier novels in the series.  The body turns out to be a guest of the hotel, and when it is discovered later that he was a private detective working on a case, the plot deepens.

There’s a lot going on at the Pennyfoot hotel this season, including a wedding for one of the housemaids, a theater production on Christmas Eve and new staff to train. To make matters worse, the plumbing goes out- but the new plumber seems more interested in the housemaids than in getting the lavatories back in operation. Cecily soon discovers that the murder and some of her staffing issues may be related. A young woman is found one morning in the courtyard, half conscious and with no memory of who she is or where she comes from. Cecily takes her in and tries to keep everything together long enough to get through the holidays, but soon finds that something nefarious is happening at the Pennyfoot... or perhaps under the hotel, in the tunnels beneath the wine cellar.

I likd this story well enough, however it didn’t grab me and demand to be read, so I did drift away from it a couple of times. The perspective shifts between Cecily and various of the help staff- Pansy (the maid getting married) and Gertie (the chief housemaid) primarily.


The author sprinkles enough red herrings to keep you guessing, although some readers may figure things out a little in advance- or rather figure who out, as everyone here has a secret and some are related to the murder and some are not. There’s not a lot of suspense here although the end picks up a bit, with Cecily exploring an old smugglers tunnel and putting herself in a bit of peril. I would have liked to have had more of this earlier on, rather than just alternating peeks upstairs and downstairs, but Mulled Murder is a fine read and a comfortable little Christmas mystery.

This holiday season at the Pennyfoot, the head count is down—but the body count is up…
With one of her housemaids leaving to get married, Cecily Sinclair Baxter wants nothing more for Christmas than some good help. Instead of visions of sugar plums, she’s calling the plumber to deal with flooded bathrooms. Then there’s the surly new janitor, who acts like he got coal in his stocking.
But as Cecily scrambles to hire and train new staff in time for the holidays, one of her guests is beyond help. Gerald Evans is found stabbed to death on the beach, and Cecily soon discovers he was a private investigator from London looking into dark doings involving the Pennyfoot. Who among the staff or guests was being pursued, and what secret drove that person to cold-blooded murder?
Posted by Greg at 7:24 AM