I've been thinking lately about POV in YA books. I'm sure this has been discussed before yada yada but I thought I'd take a crack at it. I've seen bloggers comment on it from time to time. It's well known that the majority of YA readers are female. I've heard it said that having a male protagonist in a YA book is a tough sell. Do you think that's true? I've read a few books lately with male protagonists, and they were good, but I do enjoy the vast majority of female POV's I  read, and depending on the story I may even prefer it. So I guess for me, it doesn't really matter. Still, I want to touch on a few recent reads and share some thoughts on the POV mix.

The Paladin Prophecy (and its sequel Alliance) is a great example. It has a male protagonist but strong female supporting characters. Will is a great character, kind of a smart ass but tough when he needs to be. His relationship with Brooke is sweet and pretty innocent, no making out or anything, but then there's Elise, the mystery girl. Elise is way more interesting. So you almost (not quite) have a love triangle- another fun topic- but this time with a guy as the focal point. That was kind of new for me, or maybe I just haven't read enough YA yet. Anyway I thought both books were great, and fairly high visibility- but I don't see much mention of them on blogs.

Vitro by Jessica Khoury (which I just reviewed here) was fun because it split the narrative between Sophie and Jim. Both characters were great, but in this one Jim seems more realistic- his reactions just feel like how someone would really feel or act. He's brave and does the right thing, but he has doubts and even panics once or twice when things get really bad. But at the same time he's a strong character- I think Jessica Khoury really hit it out of the park with him. Sophie is great too, but I thought Jim's was the stronger narrative. I'd be really curious to see what other readers think of this one. 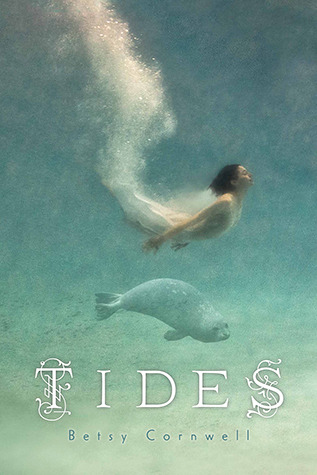 Tides, which I reviewed a while back, has a guy main character as well. Noah falls in love with a selkie and has a sister suffering from bulimia. We get other perspectives too, including Mara the selkie, so it's not all from a guy's perspective, but a lot of it is. This is another book I didn't see much of on blogs, but I was pretty new to blogging when it came out and just may not have seen the reviews. Did anyone else read this?

I think the mix is probably about right. After all, if there aren't that many guys reading YA then it stands to reason you aren't going to see a ton of male POV's. When I'm at the bookstore though I see a lot of guys in the science fiction/ fantasy section, but not very many in the YA aisle. That's too bad in a way, because the YA section seems so much more vibrant. Yeah the guys aren't going to go for the romances, but there's dystopians, sci-fi, lots of stuff. The sci fi section by contrast seems tired and mostly older stuff- the same books that have been there for years (with some exceptions, of course). There's starting to be a little crossover, and that's good, but they're still pretty distinct. Maybe that's a good subject for a separate discussion...

So what do you think? Do you have a preference among male or female POV's?