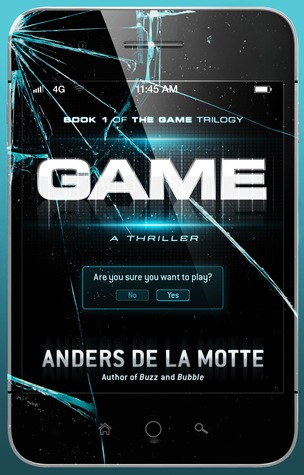 Game by Anders de la Motte asks how far one is willing to go for approval and recognition- especially if you have nothing to lose. HP (Henrik Pettersson) is a slacker who finds a shiny new cell phone on the train one night, after a hard night of partying, and thinks finders keepers. The problem is, the phone keeps ringing- someone is calling and asking if he wants to play a game. Of course he doesn't want to play a game, but when the call starts referring to him by name it gets his attention! Thinking a friend is playing a prank, he decides to play along... and gets sucked into a game that starts out simple but becomes increasingly dangerous.

As the game progresses the stakes get higher and higher, and HP finds himself crossing the line into illegal activity, with serious consequences. HP finds himself a pawn of forces he cannot control, and the game begins to take over his whole life. How far will the game ask him to go- and when the life of someone close to him is threatened, will HP be able to resist the lure of the game?

Game is told from the perspective of both HP and Rebecca, a security operative who is also HP's sister. Rebecca is much more likeable than HP but she too has deep seated issues that affect her life and career. As events spiral out of control, HP and Rebecca are drawn closer together and must discover who is behind the Game and what it really means. Secrets are revealed and they are left wondering who, if anyone, they can really trust.

Game has some great action sequences. There are several moments where the stories of HP and Rebecca converge and it really ratchets up the tension. There is a fair amount of profanity in this book, so if that offends you then you may want to consider that. I thought it was a bit much, but then again it reads just like someone might think- HP felt authentic to me exactly because of the raw language and attitude. Rebecca is a flawed character who is dealing with a huge amount of guilt in her past, and this affects every aspect of her life. Her path to self forgiveness and acceptance was one of the more compelling aspects of the story.

Game starts out strong and has a huge twist at the end, and is highly recommended for thriller fans or anyone who just wants something different. It's a thrilling ride and I'm looking forward to seeing where the Game goes next.
Posted by Greg at 12:01 PM