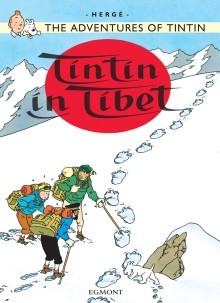 Tintin in Tibet by Herge (1907-1983) is the 20th book in the Tintin series. Tintin is an intrepid Belgian reporter who has a knack for solving mysteries and getting involved in all kinds of capers. Often accompanied on his adventures by Captain Haddock, an old sailor who likes his whiskey, and his dog, the always irrepressible Snowy, Tintin travels around the world solving mysteries and encountering new cultures. This volume begins with Tintin vacationing in the Alps when news reaches him of a plane crash. Tintin's friend Chang was en route to Europe when his plane crashed in the Himalayas. No survivors were reported, but Tintin is sure his friend is alive. He promptly decides to mount a rescue expedition, and with a reluctant Haddock in tow, they set off for the mysterious East.

Arriving in Katmandu, various hijinks ensue as they strive to hire a guide to take them into the mountains. Eventually meeting success, they set off but are soon beset by various setbacks, including strange calls in the night that may be a yeti and nervous porters. When they find the scene of the plane crash the fun really begins, as Tintin is separated from the rest of the group and finds evidence that Chang may just be alive after all. The usual shenanigans ensue, including avalanches, a stop at a secluded monastery, and a game of cat and mouse with an elusive yeti who has also taken an interest in young Chang. Its all good fun and a genuine pleasure to read.

The artwork as always is crisp and clean, and a delight to look at. Herge would express a lot of the story through facial expressions, and if you watch the art carefully you will discover nuances to the story you might otherwise miss. Herge was a pen name for Georges Prosper Remi, a well known Belgian cartoonist. I've heard it said that this was Herge's favorite of Tintin's adventures, and was somewhat personal for him as he had lost touch with a Chinese friend of his own whom he had collaborated with on The Blue Lotus years earlier. The Tintin series comprises 23 volumes, written over the decades between Tintin's first appearance in 1929 and 1983, and they are readily available in various formats. I like the oversized softcover versions myself, the art is much more enjoyable that way because of the size. A delightful series, and this is one of my favorite installments.

Tintin has a great supporting cast- besides Haddock and Snowy, there are the bumbling detectives Thomson and Thompson, who tend to finish each others sentences and cause all manner of chaos, Professor Calculus who is a bit hard of hearing, often with hilarious results, and Bianca Castafiore, an opera singer of the highest caliber and the nemesis of Haddock. These supporting players come and go depending on which installment you're reading, and there are others, but they're the core of the series. This particular book only has Haddock and Snowy, however. Its a little more tightly focused than some of the others in the series, given the locale and the nature of their quest.