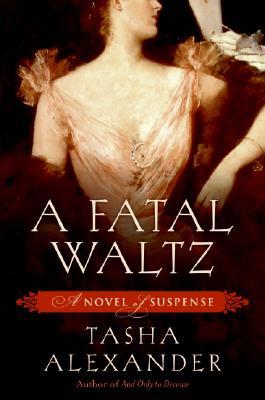 A Fatal Waltz is the third of the Lady Emily books by Tasha Alexander. Emily is a young woman of means, recently widowed, in . She is in love with Colin Hargreaves, a dashing gentleman who is an agent for the crown, and they became engaged at the end of the last book. Their romance has been a tough one and its about to get tougher in this book. This one opens with Emily and Colin as guests at the estate of Lord Fortescue, a close advisor to the queen and the most powerful man in . He does not approve of Emily, due to her interest in antiquities and her penchant for doing “unladylike” things. The feeling is mutual as Fortescue is not a very nice guy, has a penchant for blackmailing people and is more feared than admired.

Emily and Colin are among other guests at a party being held Lord Fortescue, and also present is the Austrian countess Kristiana von Lange, a colleague- and former lover- of Colin’s. The intrigue starts immediately, with Kristiana being WAY too forward with Colin and Fortescue trying his best to split up Emily and Colin. Emily is approached by another gentleman, who has noticed the friction between her and Fortescue, and asks her to help him steal some documents that could be vital to state security. This leads to a hornet’s nest of trouble for Emily, but the story really kicks into gear when Fortescue is found murdered. Robert Brandon, the husband of Emily’s friend Ivy becomes the prime suspect since he had quarreled with Fortescue prior to the murder. Emily knows he didn’t do it  and endeavors to clear his name and solve the mystery.

Emily’s quest to clear ’s name will take her to , where she soon makes the acquaintance of anarchist Gustav Schroder. Schroder may have links to the events that took place in England, and Emily has to tread very carefully. Between Kristiana, Schroder and a ruthless enemy who has followed her from , she has her hands full and gets into all kinds of trouble. She tries desperately to clear ’s name- but no one is playing nice and her and Colin soon find themselves enmeshed in a very dangerous game.
I liked this installment of the series a lot. It takes place at Christmas time but Emily and her friends get very little time to celebrate, given all the intrigue going on. My only real complaint about the Lady Emily mysteries is that they seem to get wrapped up a little too tidily, everything seems to fall into place a little too conveniently. I noticed that in the last book and again this time. However the ride is fun and engaging, and the characters are a lot of fun, so its easily overlooked. The danger level in this one is ratcheted up quite a bit, I never really thought Emily was in much danger in the first two books, but she is here. The villain of the story is quite ruthless and Emily barely escapes with her life at one point. I liked that the stakes were higher here, definetly more suspenseful than the first two books.

This book can be read as a standalone, it is not necessary to have read the first two to enjoy it, although I think its best to read them in order since the characters are so familiar by this book that it adds a lot of depth to the story. There’s a lot to like here if you like character drama- the burgeoning relationship between Emily’s butler Davis and Cecile’s maid Odette and the continuing presence of Cecile, Emily’s friend from Paris. Emily’s mother occasionally shows up, and is invariably hilarious, stealing every scene she shows up in. This is a fun series and highly recommended if you like this genre at all.