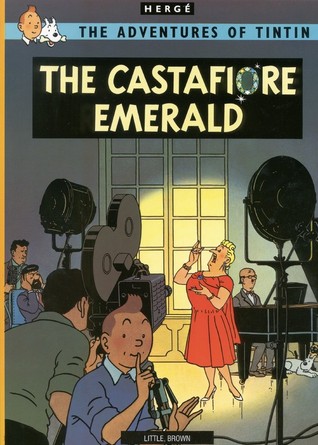 The Castafiore Emerald is unique in the Tintin canon because it takes place entirely at Marlinspike Hall, the estate of Captain Haddock. Most of the entries in this series are globe- trotting affairs, with Tintin and his companions having all manner of adventures in various exotic locales. Here the adventure comes to Tintin and Haddock for a change- but its more a comedy of errors than an adventure at times. After the events of Tintin in Tibet (see my review here), Tintin and Captain Haddock are relaxing at Marlinspike. They're out for a walk one morning when they spy a gypsy camp near a landfill. They soon discover that the gypsies, who are looked down upon by the communities they pass through, have been forbidden to camp anywhere other than the landfill. Haddock, offended by this, offers to let them camp on his property near a stream.

Returning to the house, Tintin and Haddock soon discover they are about to have a houseguest- Bianca Castafiore, the opera diva and nemesis of Haddock. Chaos ensues when Bianca descends upon the house, bringing with her an entourage, her jewels which she constantly misplaces, and a bevy of gossipy journalists who snoop about the grounds. The plot gets zany from there, with a broken step, an obnoxious parrot, and of course a missing emerald- the crown jewel of Bianca's collection. There is no shortage of suspects, and of course the gypsies are suspect as well, but the truth turns out to be a little more complicated than that!

This installment of the series is interesting because, as mentioned earlier, all the action takes place at Marlinspike. It's a nice change of pace from the travel- heavy nature of the previous volumes, and there are enough red herrings that you almost certainly will not guess the identity of the jewel thief. Most of the supporting cast makes an appearance at one point or another, and this makes for some interesting (and often quite humorous) reading. The ridiculously hard of hearing Professor Calculus is also staying at the mansion, and Thompson and Thomson, the bumbling detectives, inevitably make an appearance when the emerald goes missing. Even Jolyon Wagg, the dapper insurance salesman, makes an appearance. Herge pokes a little fun at the journalistic excesses of celebrity culture, and also touches on the social stigma endured by gypsies. This is a fun adventure with madcap humor and the usual goofy plot developments. This episode takes place after Tintin in Tibet but as with most of the Tintin books, this can be read as a standalone with no problem.