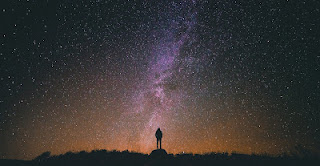 This is the fifth installment of Trust Issues, my futuristic tale of two lovers on the run from a faceless corporation that wants them dead. Nick is a guy who told the wrong thing to the wrong people and Kayla is the bounty hunter sent to track him down. But instead she fell in love and now they survive by staying ahead of the corporation.

Also if you want a good feel for this chapter this image captures it well.

The wind was howling and the sky was dark when they came out of the tunnels. Kayla came first and the wind just about knocked her off her feet. She scanned the rooftop with her heads up display but no heat signatures. That much at least was a blessing. She noticed that roughly half of the beacons were out- it would be a rough landing when they arrived. Turning back she covered Nick as he stumbled out of the tunnel, breathing hard. He had a wound on his arm but it was superficial. He'll be fine.

There was no way to close off the tunnel so they'd have to keep an eye on it. It had taken them forty minutes to make the last dash when it should have only taken ten- but then muties and scavengers could seriously impact travel time. They'd done pretty well though other than Nick's close call. Her pulse rifle charge was getting low though. And she lost her duffle bag somewhere in the melee- it was either drop it or get pulled in. She had dropped it, squeezed off a blast point blank, and ran.

At least we made it this far. Now the fun begins. Nick found a spot to lie low while they waited, where they could see the tunnel opening, and thankfully they didn't have to wait long. A searchlight appeared out of the gloom and the heard the wash of exhaust as the shuttle came into view through the murk. Nick raised his arms to wave and the shuttle came in fast, sending debris and dust over them like a wave. Coughing and sputtering they waited, trying not to make it look like their weapons were ready, as it landed with a thump and a guy in body armor jumped out. He waved them over as he scanned the area, weapon at the ready.

They couldn't see his face with the visor down. "I thought there was only supposed to be one," she yelled into Nick's ear as they approached. He just looked at her grimly. When they reached the guy Nick said something and he replied "We gotta GO." He ushered them aboard, took a last sweep, and jumped in himself. As soon as they were in Kayla took immediate stock. There was a pilot and a co-pilot but nobody else. Still, Nick was told there'd be one guy.

Kayla was looking at the cockpit. Down here visibility was crap on the best days but it was worse tonight. Once they got out of the undercity they'd be fine, as long as they didn't collide with anything down here. Still, something wasn't right. Nick was talking to the pilot now and she noticed the guy in armor was staying real close. He didn't seem too concerned about her. She moved closer to hear the conversation and he noticed her then, his eyes flicking to her weapon. "Everyone calm down," the copilot was saying. He had a gun pointed at the pilot. "We get where we're going and everyone will be fine. Nobody has to get hurt. Just put those guns down. Now."

Body armor guy raised his rifle while taking Nick's weapon with his other hand. Freelancers or Agency guys? she wondered. From the way they held themselves she thought freelancers. "I'm sorry," the pilot said to Nick as the guy reached for her weapon. Kayla did what he didn't expect- she thrust it at him and when he instinctively recoiled she was on him. She was fast but he was too- she didn't know if he was enhanced as well but she was going to find out soon enough. "Nick, get him!" she called out as they grappled. She saw Nick lunge for the copilot and heard the gun go off.

Fury overtook her and she slammed her head into the guy's face, surprising him. Pain shot through her and she thought she might have hurt herself more. Then she went limp and when he overbalanced she swept the leg, and when he went down she put her knee in his throat. As he struggled for air she lifted his head and slammed it into the floor. His helmet rolled across the floor. End of story. Looking up she saw Nick struggling with the copilot who still had the gun in his hand- he couldn't bring it to bear although she saw the pilot slumped in his chair and blood spattered all over the cockpit window. She grabbed her pulse rifle and waited for an opening.

The copilot was clearly enhanced- she could see he had the advantage now, forcing Nick down with one hand on his throat while he brought the gun to bear. Kayla evened the odds a bit, sending a pulse through the guy's arm and then ran to the pilot seat to take control. Nick staggered, gasping for air and glaring down at the copilot who was on his knees. There was no blood from the wound, only sparking wires. The guy tried to rise but Nick kicked him viciously, and he stayed down.

"Kayla. Did you have to blow the guy's arm off?
"It seemed like a good idea at the time," she said, giving him a look.
"So where's this thing going?
As Kayla had suspected it was on auto-pilot, or they would have crashed during the fight. "Nowhere we want to go. Obviously your cover is blown. We need to get a new one- or find a place and regroup."
"This was my idea, and look how it went. No ideas."
"Okay then. First things first." She didn't recognize the programmed destination but it was clearly in the Corporate zone. She turned off the autopilot and left Nick to hold it steady while she went back to question the copilot. He was less than helpful so she had Nick hover over a rooftop while she hauled open the bay doors.
"You're just going to thrown them out?"
"Yup. We can't take 'em with us."
"But..."
"We can't have 'em knowing where we're going, and we can't babysit 'em," she said. "What do you want to do with them?"
He just shrugged.
She threw the guy she'd killed out into the wind, and then reached for the copilot. "No no no bitch, what the fu..."
"Shut up," she said, and out he went.
They went back to the cockpit and he took over while she thought over their next move. Then the comm came to life. "What's going on out there? Can I get a status? Over."
Kayla thumbed the reply button.
"Fuck you. Over."
Posted by Greg at 5:27 PM