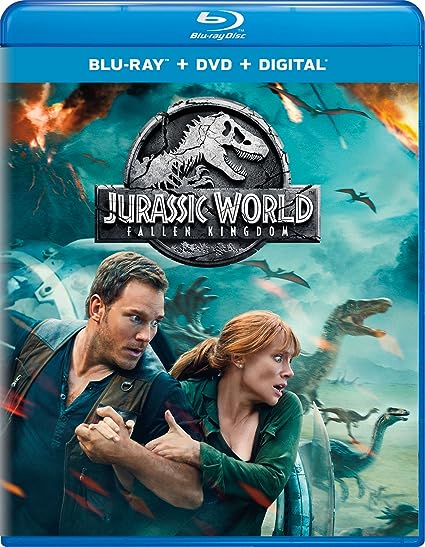 Jurassic World: Fallen Kingdom is a movie I've been wanting to see for months now. I mean- Jurassic World right? I see all the Jurassic movies, even if I did think the last one sucked. So I thought it'd be fun to do a live reactions post for this one. Will it also suck? Well, let's find out!

"Anything in here would be dead by now?" Do I even have to say it??

Okay, so they're retrieving a piece of Indominus Rex. Surely that's a good idea. I know, I know, it'll be different this time, right? Well, apparently not. *Sigh*. Of course things are lurking around. Look, when guys on a chopper are screaming at you to come quick- drop everything and GO?

Why is it always raining when bad things things occur?

"DNA sample secure." Well, glad to hear that then. Unfortunately, they lost three people by my count? The underwater dudes and the guy hanging from the chopper. That scene was completely predictable, BTW. Not an auspicious beginning...

So it's been three years. And now there's a volcano.

As usual, Malcolm (Jeff Goldblum) is talking sense. Let the volcano take out the dinosaurs. I'd have to agree.

Here's Claire. Dinosaur Protection Group? *Hard eye roll*. Wait though- why am I against the dinos? I guess- they should have learned by now???

So Claire gets a call to meet with Lockwood, who was Hammond's contemporary. Nice estate. She's of course all in on the dinos. I don't trust this Eli- or Lockwood though- one bit. Does Claire have to be sooo naive??

They want to save Blue. Cause raptors are such a good idea. And for that they need- Owen. Yes, Claire has to convince Owen, and so we are forced into their tortured non- chemistry again.

So who is Maisie?

Why is no one questioning yet why Lockwood is going to all this expense to save dinos?

So it's time to hunt Blue. And oh look... Wheatley is an asshole. Shocker! But wait... they're gonna abandon Claire and Franklin too? Wow, they are asses.

I'm pretty sure a dino would not hang around lava.

Oddly enough, the dino stampede doesn't look quite as good as the stampede from The Lost World, though? CGI- wise, I mean. Although points for Ankylosaurus.


Ooh wheeeeeee! Rolling off the cliff though looks fun! That's gotta be a ride somewhere...

Always we're looking at how greedy, corrupt men exploit and mistreat the poor dinos. Which, yeah is valid, because what would happen? Probably something like it. This has a lot of callbacks to The Lost World, actually, with the Owen/Claire/ Franklin watching the evac from a ridge, the evac itself (airlifting the creatures out), the stampede. Would be nice to see different plot, though?

The only thing here though is everything is inferior to The Lost World. Wheatley the great white hunter is a poor man's version of the dude from The Lost World, the dinosaurs being confined scenes are't quite as good, etc. It's like when I watched The Force Awakens and realized I'd seen the movie before, done better... as Star Wars. I'm getting that vibe here.

Of course the keys are in the truck!

Ooh they left one behind! That... was actually kind of heartbreaking...


The casting here... ye gads. First the senator earlier in the show.. that guy is always in B movies. Now we have Toby Jones as Eversoll- he was in Wayward Pines. I'm sorry if this sounds mean, but you know... sometimes the casting makes a movie feel chintzy?

The Indoraptor. *Yawn*. Now they're going to use dinos as weapons? This is getting dumb.

Oh cause these animals aren't guarded or anything.

So Lockwood was innocent.

So... we have buyers coming, including an arms dealer and a sinister Russian. Is this a Jurassic Park movie or a Bourne movie??

So the dinos are moving out, all over the world after being sold?

Why is that dinosaur bashing the wall just because whistling?

This is pretty alarming... if something like that got out.

Fun to see auctioners getting booted!

Blue's on the loose!!

Blue to the rescue... saw that coming.

Is Claire gonna push the button? Nope! Maisie's gonna. There goes the neighborhood.

So... welcome to Jurassic World. The dinos are out in the world, where do we go from here?

Okay, in spite of rampant silliness, that was kind of an... okay movie. Popcorn fest! Better than the last one?