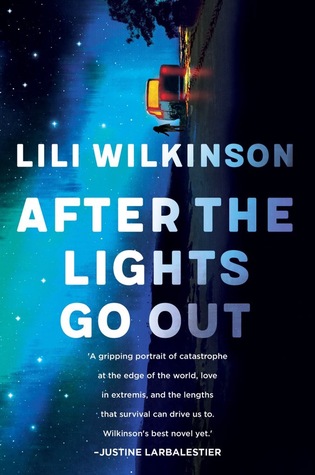 After the Lights Go Out is an Australian end of the world story set in the outback town of Jubilee. Pru Palmer and her sisters Grace and Blythe are always ready for when the "big one" hits- or alternatively, when the SHTF (shit hits the fan). They practice trekking to the bunker on their property and their father has drilled into them that family comes first, and that others are not to be trusted. So when the end literally comes while their father is away, their training comes to the fore- but at the same time, as events spiral out of control around them, they have to ask themselves- should they keep to themselves, as their father taught them, or should they help others?

Pru is in town when it happens, and she's just met a guy named Mateo, who's Puerto Rican by way of New Jersey, and to say that he sticks out like a sore thumb is an understatement. He and Pru develop an attraction, and it's partly this relationship that causes Pru to question the things her father has taught her. When the power goes out, and doesn't come back, Pru and her sisters have to decide how much to share with others- and also what they want to do in the event their father doesn't return.

I liked this and it's a fascinating look at what the end might look like from the Australian outback. So often stories like this focus on cities and the catastrophic events that occur when society breaks down- and it does break down here, but there are also moments of heroism and selflessness. This runs counter to everything their father has taught them, however, as he constantly preached trust no one. And you can kind of see his point- I mean people are unpredictable, and there are plenty of bad sorts who will take advantage of the weak if society were to break down, but at the same time Pru is challenged when she sees hope and love flourish amidst the chaos.

At the same time though this book irritated me at times, specifically some of the decisions Pru made. One of her earliest decisions flies right in the face of everything she's been taught, and while I feel her skepticism of her father's teaching is justified later in the story, I thought it was way too early for her to just throw everything out and do what she does.

In the end I had too many issues with some of the decisions made and the characters themselves. It's a fine read but again, some of the reactions- like when Mateo discovers that Pru has been keeping secrets from him- I mean, what did he expect? She's a teenager, like him, raised a certain way- what exactly does he expect she would do in the early days of a crisis, and yet he gets all judgmental- it just felt forced to me.

I cannot believe Pru left her sisters behind (and in the care of slimy Keller) right at the outset, to go with a guy she just met, some eighty kilometers through the desert in a possible apocalypse, when her dad has spent years training her to do the exact opposite. Get her sisters to the bunker and ride it out- stay safe. Yeah her dad may be a whackjob, but she's fifteen and totally devoted to her sisters- but then she leaves- knowing she doesn't even have enough gas to get there!

The townspeople really pissed me off when they blamed the girls for having supplies in a bunker. That was their dad's doing, and he trained them to be survivalists, so why they're bitching at the kids for doing what they were raised to do is beyond me. And then they take all their stuff! I mean, that's probably what people would do, and maybe it's the right thing to do for the community, but I didn't like how the town distrusted the girls for something their dad did, and just unilaterally decided how their stuff would be divided.

Having said all this, I do kind of like how the author made me angry but then subverted my expectations a bit. Maybe that's effective storytelling and I should be admiring it, but again there were just some character decisions I couldn't get behind. And there seemed to be a hole in the story regarding Rick, the dad- he was missing for most of the story, and when he came back he was clearly a nutcase, but four months of staying away because he wasn't sure if the girls were compromised? It just felt like a complete plot contrivance to keep the dad away until the end, and then explain it away sloppily.
Posted by Greg at 7:43 PM