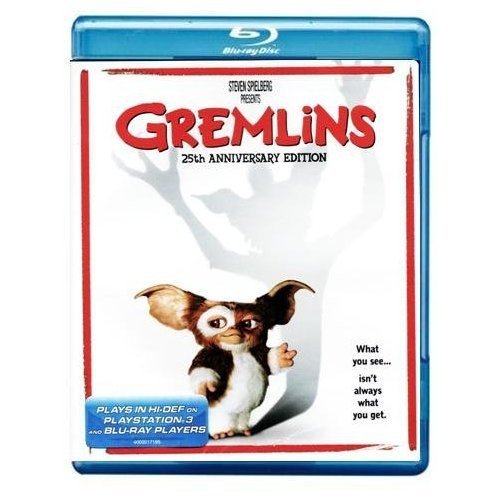 This week is Gremlins. Just in time for Christmas! Because this is a Christmas movie... well, kinda. It takes place at Christmas, so that counts, right? And it's sorta cuddly and sweet. Well, initially. But we'll get into all that. What you need to know though is that something cuddly and cute by day might not be so by night... if you feed 'em after midnight, or get 'em wet, or whatever. So we start off in Chinatown and a guy named Rand Peltzer, who's an inventor. He's trying to sell some of his junk and maybe find a present. Some kid leads him to a shop owned by a mysterious gentleman (of course)- it's all candles and artifacts, you know, and what does he find? Why, a Mogwai of course!

Peltzer's got to have it for his son as a Christmas gift. After all, it's cute right? The elderly gentleman won't sell though- with Mogwai comes much responsibility, after all. He won't be swayed but the kid sells it to Peltzer anyway unbeknownst to his grandfather- he says the old man's crazy and they need the money. There's three rules Peltzer has to follow though. 1) Avoid light. Oh, that's easy enough. 2) Don't get it wet. And 3) Most importantly- never feed it after midnight. Ooh. Peltzer's like yeah whatever and off he goes.

So then we get Christmas music and a nice, quaint little American town, all covered in snow. And Billy Peltzer (Zach Galligan) is trying to start his VW Bug- but it won't start. Filing this away as I'm sure this is foreshadowing. He works at a bank (and takes his dog to work?) and Kate (Phoebe Cates) the love interest works there too. Cue awkwardness. You know, as an aside, when Billy is walking down Main street I was looking to see if there was a bookstore. I didn't see one.

We also meet some of the charming characters in this little town, including the Grinch-like Mrs. Deagle. And oh Judge Reinhold is in this as a smarmy bank VP who likes to taunt Billy. And he asks Kate to have dinner with him at his new apartment- and he has cable now! Wow. This is like 1984 though. Anyway Billy comes home and asks his mom if she needs any help in the kitchen. Nice kid. And Pops of course brings home... the Mogwai!!

Cute little thing. Doesn't like lights though. And thankfully Barney the dog approves- they're gonna be friends, I guess. Billy's got this cozy little upstairs attic/ bedroom thing and Gizmo (that's what they name him) settles right in.

Oh my gosh- Corey Feldman is in this and he looks like he's about 10 or something!

So they spill water on Giz naturally and now there are 5 more Gremlins. And the leader Stripe (he has a white stripe on his head) is kinda mean- Pete (Feldman) tries to pet him and almost gets bitten. Clearly at this point they should go back to Chinatown and, you know, divest themselves of all Mogwai, but no. "The new ones aren't like Gizmo," Billy helpfully points out. Uh-huh.

Billy and Kate are a cute couple.

Billy's dumb though. He makes another Mogwai for his high school teacher to examine, and then he feeds them after midnight which of course starts everything. To be fair, he didn't think it was midnight because his clock had stopped. But I'm wondering- it's midnight somewhere, right? I mean who's to say Mogwai's are on eastern standard time or whatever? Right? Also, who puts chicken in their fridge on a plate (leftovers) but doesn't cover it up with something?

Hey something chewed the wires of his alarm clock. No wonder it stopped! And now the Mogwai are all in a pupal stage- cocoons. Billy's teacher explains this to Billy and Pete, who remarks that it sounds like what's happening to his mother. That actually made me laugh. Meanwhile Billy's mom is baking cookies!

Okay this is fun. I never noticed this before but at the convention, when Billy's dad is talking to his mom on the phone, you can see the time machine from the 1960 Time Machine movie in the background - and when they go back to that scene the time machine is gone and people are mystified. Love it.

Oh they're hatched! First casualty is the science teacher. He's toast. And Billy's mom is all alone at home with five of them hatching.

I love the pool scene.

They're on the loose! The best part is how happy they are causing destruction.

Ooh Mrs. Deagle gets hers.

Okay the whole town's overrun! And Billy and Kate have a plan.

Of course everyone is gone now, so there's no one to help Billy and Kate take down Stripe. And seriously- law enforcement in this town? Big fail. In fact some guy was getting overwhelmed by gremlins and what did the police chief do? Rolled up his window and drove off! Serves him right that he crashed. :) With a little help.

Stripe is kinda taking it to Billy here. They're in a department store and Billy's got a bat but he is not doing well. Ooh Stripe just shot him with a crossbow! And now he has a chainsaw. Um, good luck Billy. What is Kate doing with the fusebox meanwhile? Ohhh... she hits the floodlights. Gotcha.

Stripe, who now has a gun, is trying to blow poor Billy's head off. Plus he's found a fountain- ooh he's trying to "reproduce" again and Billy is sort of just watching when it's Gizmo to the rescue!

So sunlight kills 'em just like it would a vampire, huh?

Alright, the moral of the story here, folks, is just say no to those exotic pets. Mr. Wing the Chinese gentleman who Rand "bought" the Mogwai from shows up to take Gizmo away. Seems sensible considering half the town has been exploded. Billy though seems surprised by this? Really, kid? Anyway Giz says bye to Billy- that's pretty heartwarming. He even says "Bye bye woof-woof" to Barney the dog, which is super cute. Awww...and Billy "may" be ready for a Mogwai someday, Mr. Wing assures him. So there's hope.

So... does Gremlins suck? Well, it hasn't aged very well, and it's kinda boring in the beginning, but the gremlins going apeshit all over town was pretty entertaining. And it has its moments, so I'm going to say it doesn't suck! At least, not that much.
Posted by Greg at 7:17 PM