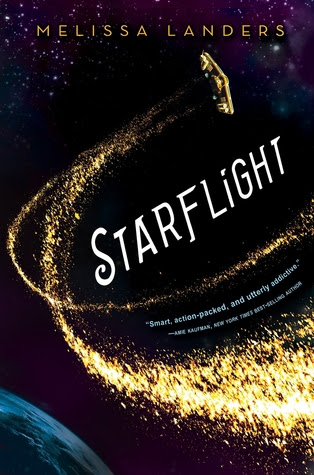 I wasn't sure I was going to like Starflight. I heard good things and I like a good space opera, but I also had just come off reading The Long Way To A Small Angry Planet and that's a tough act to follow. As I settled in with this one I realized the two books are similar in some respects but also very different. Both share a sense of a lost protagonist and a crew trying to find their way in the galaxy. A galaxy that is not very friendly.

Solara is a felon who's been marked as a sign of her conviction and Doran is an arrogant rich kid who hates Solara, and they end up on the same spaceliner heading towards the outer colonies. In fact Solara ends up indentured to Doran as she has no other way of getting passage. Predictably this is the story of their relationship and how it evolves, and also how they fit in to the crew of the rogue ship they encounter when things get too hot. Solara is a character I liked right off the bat, and Doran took a while to grow on me but he's meant to be that way- we're supposed to dislike him at first. I thought their relationship evolved in a believable way and I really liked them as a couple- probably my favorite part of the book was their relationship.

It also helps that we get Doran's POV along with that of Solara. He's much easier to understand when we get in his head a bit. The crew of the ship are not as developed as say in The Long Way but while they are important, this is clearly Solara and Doran's story so that makes sense. And the crew do have their charms- I particularly liked Renny and the captain Rossi. Oh and a certain furry glider.

The only real issue I had is it seemed too easy at times? I mean nothing with the pirates was easy per se but the fact that they waltzed out of there the way they did seemed a little implausible. And what did Rossi's crew do for engine repairs before Solara got there? But other than that this was an enjoyable, fast paced YA space adventure and I would love to spend time with these characters again.
Posted by Greg at 12:00 AM