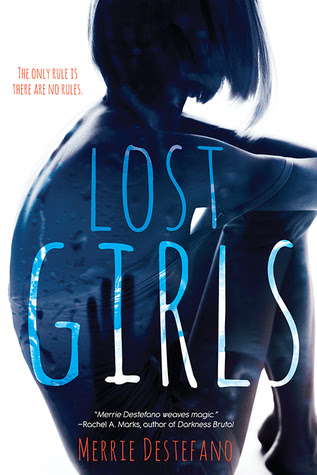 I loved this book. We'll just start with that. This one has a bang up beginning. Rachel wakes up in a ditch covered with leaves and begins screaming. She disappeared two weeks ago but has lost a year's worth of memories. And in that lost year, leading up to her disappearance, she went Goth and changed friends, she does drugs and she fights- but she doesn't know why. What happened to her? Why won't anyone tell her what she was like?

Rachel used to be a geek and hang out with her friend Molly, they would do cosplay together and watch The Lord of the Rings, but in the last year Rachel ditched Molly and started hanging with the cool crowd. Her new best friend is Lauren the head cheerleader and along with Zoe and Stephanie they smoke pot and go to raves. There's more going on at the raves than dancing though, and Rachel is surprised when she realizes she can kick ass- literally. Somewhere in the last year she developed serious fighting skills- and so did her friends. Not only that but she's also involved with Dylan, the guy she's crushed on for years and who apparently likes fighting as much as poetry.

The book is divided into three parts and I liked that- each part mirrors Rachel's journey as she slowly begins to remember what happened to her. It turns out that she was not the only one who went missing- there are other Lost Girls and the FBI is looking for them. Rachel knows that her memory may be the key to finding them, but whatever happened to her was so traumatic she just can't access those memories. There's a lot of YA books out there about missing memories and I've read a few of them, but this one is clearly my favorite. The writing is exceptional and I thought the author did a fantastic job making Rachel both sympathetic and relatable, but also more than a little frightening.

Whatever happened to Rachel made her tough and as she slowly remembers she realizes that on some level she likes the way she is, the tougher person she has become. Almost ruthless. I think this is realistic because anyone who goes through what she has (some of it willingly) would almost have to have that drive to excel the way she does. She wants to be the same person she was when her and Molly were besties, but she's not- she's still the girl Molly knew but she's also someone else.

The only issues I have with this story are the realism factor - I could kind of see where I thought it was going and I thought it was a tad over the top, but can't really say as it would be spoilery. This is a minor issue though and overall I loved this book. It seriously had me on the edge of my seat more than once, and it was a little grittier- felt more real- than a lot of YA. The characters are great (including Rachel's family) and all I can say is- if this appeals to you at all, read it. I'll be looking for more of Destefano's work.
Posted by Greg at 12:00 AM