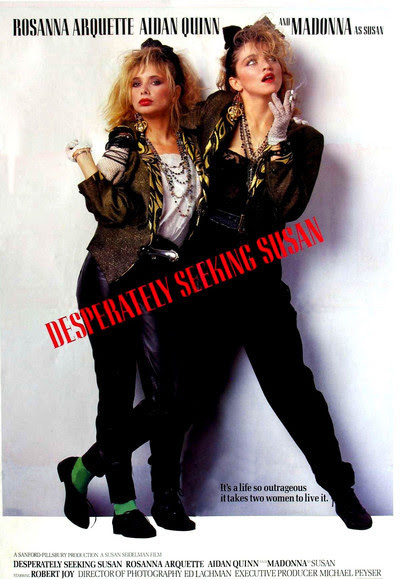 Desperately Seeking Susan is one of those guilty pleasure movies. Starring Madonna and Rosanna Arquette and a quirky supporting cast, it's a fun ride through 80's New York City and the bohemian scene. Susan is a free spirit and a drifter (played to the hilt by Madonna) but the story is really about Roberta, a bored housewife from New Jersey who gets mixed up in Susan's crazy lifestyle after hitting her head and losing her memory.

The title refers to the personals section of a New York City tabloid- when Roberta sees the ad for "Desperately Seeking Susan" she goes to the meet, but has an accident. She's been following the personals and realizes that Susan and someone else keep track of each other through the ads- and bored with her life, she's sort of vicariously living the thrill. After the accident she gets involved with a guy named Dez who is friends with Susan's boyfriend. The boyfriend Jim is trying to find Susan, and there's also some silliness about stolen earrings from an exhibit. This complicates everything, as Susan knows about the earrings- and the thief, out to get her, goes after Roberta due to mistaken identity. Susan joins up with Roberta's husband Gary, a hot tub salesman, to try and find Roberta.

This is such an 80's movie. Madonna is great as Susan, and Gary's sister Leslie steals a few scenes with her one liners. Poor Roberta is unhappy with the jerk she's married to, so even though she has an affair you kind of root for her and Dez- or at least I did. Towards the end of course Susan and Roberta meet, and Roberta has to decide what she wants out of life.

This is actually one of my favorite movies, it's just fun and quirky and all around awesome, as well as being a picture of the times. And it's got a great song- Into the Groove- by Madonna that captures the feel of the movie perfectly. Do yourself a favor and check this one out. Don't expect too much, but if you're sitting around some night with nothing to do, crack your favorite beverage and spend a little time with Susan and Roberta.
Posted by Greg at 2:00 AM