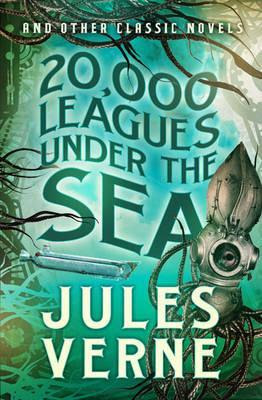 20,000 Leagues Under The Sea is a book I've always wanted to read. I grew up fascinated with the Nautilus, the great submarine with a library and windows that look out upon the undersea world. The idea of Captain Nemo, a man who forsook the surface world with its petty jealousies and endless conflicts to pursue solitude and peace was a romantic one as well. I have several versions and enjoy seeing it on my bookshelf, but I had never actually read the book.

20,000 Leagues is the story of Professor Arronax and his companions who find themselves captured by Captain Nemo and taken aboard the Nautilus. Thus begins a journey around the world and through a fabulous undersea realm, a journey that will take the Nautilus and its crew to the lost continent of Atlantis and even the south polar icecap. Throughout all this Arronax tries to understand his host, to glean what motivates him

This book is a classic early work of science fiction. The Nautilus is fascinating, and more so for the fact that submarine technology was in its infancy at this time. However I have to say that I was not enthralled by this novel. The pace and the story  just didn't grab me, and Arronax is largely a passive spectator. There are pages of descriptions of marine life, and I found myself necessarily skimming these to stay in the story. The descriptions are more scientific classification than anything else, so that was a bit tedious, at least for me. Nemo also disappears for days at a time, but in a submarine, it's never clear where exactly he goes. The crew is not often seen, either. There were some minor details like this that affected my enjoyment of the story, unfortunately. I thought I would like this more than I did.

In spite of these flaws I'm glad I finally read it. So even though I didn't love the book I still enjoy the story, and the Nautilus remains as fascinating to me now as it ever has.