Review: The Nine Lives of Christmas 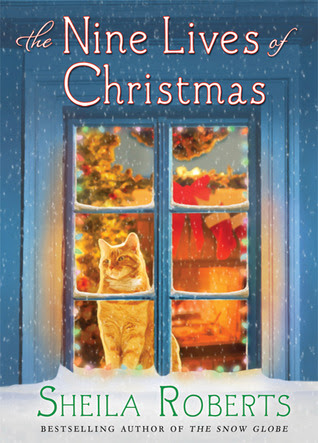 The Nine Lives of Christmas is a holiday story of a man, a woman, and a cat who all need a little help at Christmas. Ambrose the cat is in trouble- and willing to make a deal with his maker to save his ninth (and last) life- when Zach, a firefighter in the town of Angel Falls, comes to the rescue. Ambrose has nowhere to go, no home to return to- and with the holidays approaching and nowhere else to take him, Zach grudgingly takes the cat back to his place. Ambrose immediately makes himself at home- but realizes that part of the deal is he helps Zach with something- but what does Zach need?

Zach is a nice guy and very much single- happily so. Bad experiences in the past have jaded him and he prefers to keep his relationships casual- no strings attached. He only intends to keep Ambrose for a while, until he can find a home for the cat- but when Zach meets Merilee in the pet food aisle, he finds that maybe he's not as happy as he thought he was.

Merilee is also single, and shy around guys- having had a weight problem when she was younger, she's in her mid twenties now and fit- but still nervous as all get out when she crosses paths with Zach. There's an immediate attraction- so why does he hold himself back? Little does she know that Zach has a girlfriend- and when they meet the sparks fly. That along with Zach's family issues keep him from taking the next step with Merilee- he feels he's all wrong for her, for reasons that become clear later. The girlfriedn of course is a piece of work- and she hates his new cat for one thing- and as time goes by, Zach realizes he has no intention of givin gup the cat. Ambrose, for his part, realizes that Zach and Merilee want to be together- and that his "deal" involves making that happen anyway he can.

This is a fun and heartwarming holiday tale and I enjoyed it a lot. A good read for a cold night with a blanket and a warm drink. Comfort reading I suppose, and chick lit all the way. So why did I read it? Well, the cover drew me in, and I like a good Christmas read. Zach and Merilee are both likable, and Ambrose's perspective was probably my favorite part of the story. He is full of fun observations and wry insights into human (and cat) behavior. There's a hilarious scene where Ambrose brings Zach a "gift" from outside and leaves it where Zach and his...um, sleepover guest wil lfind it. There are a few slapstick moments like this but by and large this is a relationship story. The ending is entirely predictable, but so what? The journey there is fun.

Apparently this is an upcoming Hallmark channel movie. I'm not exactly a regular watcher of that network, but I did see a blurb for it and not sure the casting works for me after reading the book. I would watch it if it was on, given how fun the story was. A good, light holiday read.
Posted by Greg at 9:00 AM