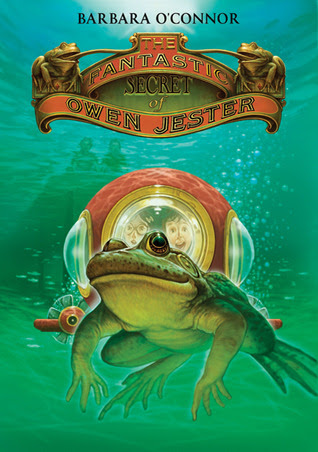 
The Fantastic Secret of Owen Jester by Barbara O’Connor is the story of Owen, a young boy whose family has to move in with his grandfather after his father loses his job. Their next door neighbor is Viola, a know-it-all girl who Owen can’t stand. Owen has a frog he just caught- “the biggest, greenest, slimiest, most beautiful bullfrog ever to be seen in Carter, ”. Owen names him Tooley Graham and is very proud of him- and he doesn’t appreciate it when Viola tells him in no uncertain terms that Tooley would be better off free.

One night Owen is in bed listening to the train go by. He hears a crashing sound and realizes something has fallen off the train. What could it be? He resolves to find out, and recruits his friends Travis and Stumpy to help. They find more than they bargained for however. It seems that a small submarine has fallen off the train, and the boys decide to use it in the local pond! Of course they want to keep this a secret from Viola, who naturally turns up at the most inopportune times.

Finding a submarine is one thing, but getting it to the pond and figuring out how to work it is something else. And that’s where Viola comes in. Viola is smarter than the three boys or at least better read, and she loves to irritate them by pointing out things they have not thought of. Viola wants to be part of the group but they don’t want anything to do with her. Until Owen realizes he needs her help…

Throughout the story Owen wrestles with not only finding the mysterious something, but also with whether or not he should free Tooley. His frog increasingly seems despondent and he starts to realize that Viola may have been right about the frog…

The dialogue between the kids is funny and authentic, I felt like I was listening to real kids talking. The relationship between the three boys seemed natural, but the best parts of the book are when Viola shows up. I felt a little sorry for her at first, the boys aren’t very nice to her, but she comes through for them at the end. There’s a moment towards the end where Owen and Viola share a moment of triumph that was touching.

This book is a great kids story, a nice summertime adventure. The idea of somethingmysterious falling off a train in a remote Southern town seemed to me like something that would happen in a Spielberg movie. That’s the vibe I got anyway, and is what initially drew me to the book. The book itself reads quickly, the chapters are short and breezy and thus perfect for kids or even reluctant readers. It’s fairly short at 168 pages and has a Q&A with the author at the end.

The Fantastic Secret of Owen Jester is a charming book and was a pleasure to read.

The Youtube trailer is here.
Posted by Greg at 11:19 AM