Waiting on Wednesday #12 The Falconer

This week I'm waiting on... The Falconer by Elizabeth May. I picked this one a couple months ago- so why again? Well there have been a few updates. You can now read chapter 1 here.

There is also an early review here. Expected pub date is later this month in the UK, but not til March in the US.

There is also a Goodreads giveaway here. 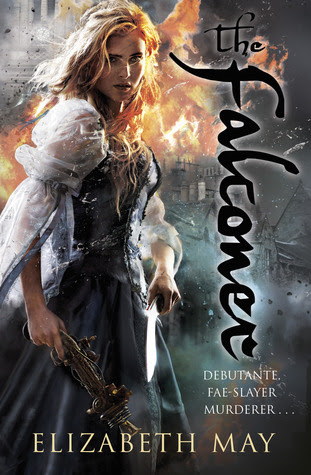 Heiress. Debutant. Murderer. A new generation of heroines has arrived.

Lady Aileana Kameron, the only daughter of the Marquess of Douglas, was destined for a life carefully planned around Edinburgh’s social events – right up until a faery killed her mother.

Now it’s the 1844 winter season and Aileana slaughters faeries in secret, in between the endless round of parties, tea and balls. Armed with modified percussion pistols and explosives, she sheds her aristocratic facade every night to go hunting. She’s determined to track down the faery who murdered her mother, and to destroy any who prey on humans in the city’s many dark alleyways.

But the balance between high society and her private war is a delicate one, and as the fae infiltrate the ballroom and Aileana’s father returns home, she has decisions to make. How much is she willing to lose – and just how far will Aileana go for revenge?

What are you waiting on?
Posted by Greg at 7:22 AM