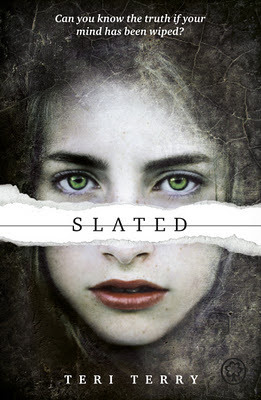 Kyla is a young girl who is meeting her family for the first time- her new family that is. Kyla’s been Slated- mindwiped, all traces of her personality removed. Everything is new, she has no idea who she used to be or why she was Slated. Those who are Slated are not supposed to remember anything of their past. However Kyla starts to experience memories, flashbacks. She’s supposed to be right handed- but draws better with her left hand. Kyla is not like other Slated kids- she is different somehow.

She soon realizes she is being watched- at home, at school, pretty much everywhere. If she slips up in the slightest, she risks being returned- whatever that means. But she’s knows its not good. Kyla soon meets Ben, a Slated boy who is popular and there is an immediate attraction. But Kyla has a rival for Ben’s affections- Tori, another Slated. But when people around Kyla start disappearing- friends as well as enemies- Kyla discovers she’s in a lot deeper than she realized.

Slated is set in the  in the 2050’s and the world is similar to ours in a lot of ways, but just edgy enough to get your attention. I was really drawn into the world.  Kyla can trust no one and there were several characters who are just nasty. I thought a few times can’t the girl catch a break? As the story progresses we discover just how twisted this world is, and how little freedom anyone truly has.

This book kept me reading. The chapters are short and we’re fed just enough information to leave us guessing but wanting more. My only real complaint is the pacing of the romance. Ben is a well liked guy and he falls for Kyla just as she does for him- however I just thought it was handled rather clumsily and it seemed rushed.

Otherwise the pacing and the suspense are spot on. There’s a few surprises and we find that some characters are willing to help Kyla, but its hard for her to trust since so many other people are out to get her. At times this reminded me of the Bourne movies- we get hints that Kyla is a badass who could kick the crap out of someone, she can look at a map and almost immediately memorize way points, her attitude –you just know she’s cutting loose at some point. And she does.