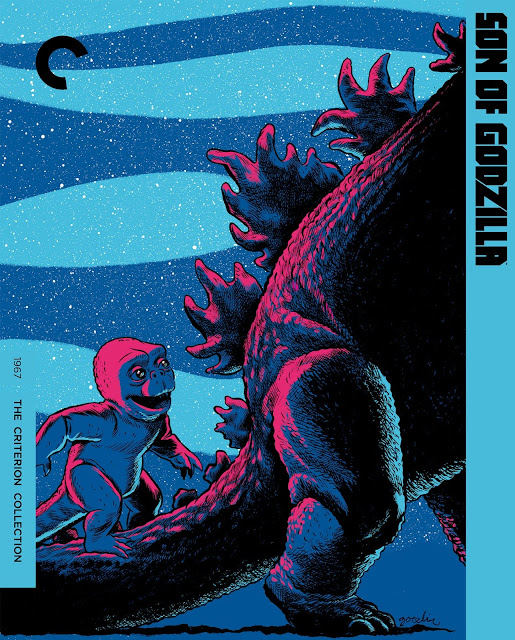 So I decided to do a livewatch of Son of Godzilla. I didn't make it in time for Scifi Month but as a kid I loved this one. A monster island, huge praying mantises- what's not to like? It's terrible naturally but fun too? I'm going to share my thoughts in real time as I go. So... let's get going!
So we have a storm and an airplane has a close encounter with the big G. Is this the quickest he's ever shown up in one of these movies? Good grief we're barely a couple minutes in and Godzilla is already moving. He's going to... Monster Island! Actually I don't know if it's called Monster Island, they call it something else, but whatever. And the iconic roar. Anyway we have this scientific base on the island- weather research, I guess- and it's all secret. But a reporter named Maki Goro parachutes onto the island and I'm not entirely sure why?
They have giant praying mantises on the island.
Nice Hawaiian shirt!
Why are they sending him alone if there are monsters on this rock?
There's a woman on the island.
So the problem is overpopulation, and these guys are trying to find ways to control weather. When I was a kid I think I liked this island, the whole idea of it, and it is a beautiful spot. Anyway apparently the island is too hot- not useful- so they're going to try to... freeze it? The reporter takes off to warn the woman.
They launch a balloon to release the... cold stuff. I love how they just go ahead, the reporter's out there but fuck him.
Well, that didn't go well. Their shit malfunctioned and instead of cold they now have a heat wave.
Four days later and the place is wrecked. Radioactive whatever. And holy shit the mantises are bigger than fuck now.
So what're the mantises doing? There's three now. Ooh, they've unearthed an egg! Is that Godzooky's egg? Okay, let's talk about Godzooky. Or Minilla, I guess his name is. I always thought baby Godzilla was Godzooky- where'd that come from? Anywho... they're stranded.

Wait... what about the egg?

So they have a nighttime encounter... with the mysterious woman living on the island.

Oh, there's the egg. The mantises (manti??) are trying to crack it open. Were they doing that all thoughout the night? Good grief, that's rude.

Godzilla's coming! And naturally he stomps right through camp. :)

He doesn't take kindly to them messing with Godzooky... okay, Minilla. They of course don't really get the hint so it's throwdown.

That's awesome- the big G flames one of 'em.

Godzilla is beating the living shit out of the manti, and part of one comes off right in front of baby. Yikes!

I guess that's how you do it!

So Godzooky is left behind but the strange woman shows up. Then big G returns and Minilla (I know I keep changing) hitches a ride on G's... tail?

So the woman apparently is daughter of an archaeologist who was on the island. And Gimantis shows up and Goro may be in love with his new friend.

The woman (who's name is Rako) apparently has bonded with Minilla and calls to him (like the Mothra princesses).

So there's a disease and they need special water from Godzilla's area.

There's a giant arachnid on the island.

Raeko knows her way around. Her and Goro are fun. The spider is actually Kumonga (I guess).

This is kind of an idyllic little place Godzilla has going here. Godzilla's teaching junior how to use his radioactive breath.

Raeko runs into trouble and junior to the rescue! Well, not very effectively. But he does wake up Kumonga (I guess he wasn't awakened by Goro).

That spider needs to die.

That spider is a pain in the ass!

They have a secret way out. And junior shows up- wants food. Unfortunately junior runs into Kumonga... and so does Gimantis. It's up to big G to sort things out...

They're going to make it snow!

So Godzilla and Godzooky are going to hibernate.