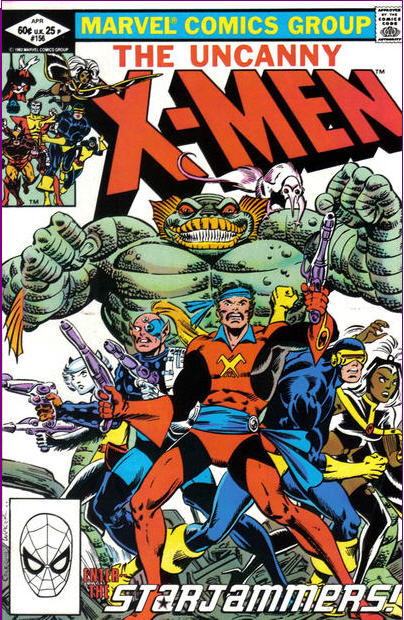 Colossus is dead! Or... is he? Seemingly killed by Deathbird in last issue's fracas, he's still alive- barely. He has a pulse but it doesn't look promising. Meanwhile, New York's finest show up and and are pissed off about the building that has just collapsed, and Tigra has to try and talk them down. I always liked it when comic book writers actually, you know, addressed the fact that superhero fights routinely destroy everything in sight! Looks like a moot point, though, as an immense craft arrives over Manhattan and whisks the X-Men away. Turns out it's the Starjammers, those lovable space pirates led by Corsair (who also happens to be Cyclops' father, as he learned last issue).

They promptly put Colossus in a life support module, and Sikorsky, the robotic medic aboard the Starjammers' ship, says it looks grim, but yeah right- we know he's gonna make it. It's an otherwise happy reunion for Corsair though, as he thought his comrades had been slain by Shi'ar. Meanwhile, Kitty and Nightcrawler are still being held on the Shi'ar ship orbiting Earth, and Admiral Samedar, we find, is in cahoots with Deathbird, the sister of the abducted Empress Lilandra. Ah, treachery.

Not only that, but he shows footage of Colossus being (almost) killed to the two of them, just to be a jerk. Deathbird has Xavier with her, along with Lilandra, and Samedar's job is to wipe out Earth- although his boast that he will take out any Imperial guardians who oppose him seems kind of unlikely. The Imperial Guard are tough. Anyway Xavier wakes up and has a horrifying vision of something...alien and evil...that seems to be linked with Lilandra, but after psi- scanning her she seems normal. Hmm... those of us who've read these before know where that's going.

Xavier and Lilandra have a bittersweet reunion before Deathbird shows up to taunt them, and we learn that Deathbird was cast out of the Aerie for some horrible crime, but all she really wants is to be Empress. And Cyclops meanwhile has a nice heart to heart with his father Corsair. They bond a little in the Starjammers' observation deck.

"That it is. This is my favorite spot on the ship. I like to sit up here, by myself and watch the stars flow by. I've never tired of the view. I doubt I ever will."


Corsair then relates to Cyke more fully the story of how his wife and he were captured by mad Emperor D'Ken of the Shi'ar years ago, and how D'Ken killed Kate in front of him just to torment him. The Shi'ar were scouting Earth and taking specimens for study. I don't think that's ever been followed up on, in stories, but maybe they don't do that anymore. Anyway, Corsair was sentenced to the Star Pits (whatever those were), which is where he met his companions who would later, with him, become the Starjammers.

It's a nice poignant moment as Cyke learns how his father became the way he is, how he transitioned from a man who loved peace to a warrior and pirate, fighting against the Shi'ar. The moment, however, is short lived as they catch up to Deathbird- only to be shocked when a truly gargantuan...something... arrives to capture them. It appears to be alive, and it swallows both ships whole. This, my friends, is apparently a Brood ship, those nasty Alien- like creatures that we met last issue. They prepare to board but Colossus, who is now all healed up, leads a surprise attack against the sleazies.

The Starjammers are awesome. Love those guys. The fight, meanwhile, is causing the gargantuan Brood ship to be stressed- it's alive, see- and the Brood commander is shocked that the X-Men are so powerful that it's affecting their ability to control their ship. Is the ship a slave? At any rate the commander wants the X-Men taken alive, thinking they would make good host candidates for their queen mother- that doesn't bode well. And while all this is going on, Cyclops and Corsair rescue Xavier and Lilandra.

Storm, meanwhile, is fighting Deathbird, and is horrified when she realizes the ship is alive. All life is sacred to Storm, after all. Distracted by this knowledge, she is vented out into space by Deathbird, and barely survives the vacuum of space- luckily the Starjammer is able to rescue her, under the control of Waldo, their onboard computer. Storm relays to the team that the huge Brood vessel is alive, and Waldo informs them that it is an intelligent being, but that the Brood have destroyed it's higher brain functions, so it's essentially a slave.

This really is a superb space opera from a comic perspective. Lots of little trivia bits too- we learn, for example, that Hepzibah's feline species vied with the Shi'ar for control of their galaxy at one time. Since the Shi'ar are avian, I guess the birds won over the cats this time!

The Acanti ship (that's what the Brood ship is- an Acanti. Basically a space whale) is super cool, and the Brood actually construct domed cities on it. It's a neat concept, and is just an example of how author Chris Claremont was firing on all cylinders, creatively, at this time. This truly was the golden age of the X-Men, as these issues make clear.
Posted by Greg at 3:09 PM