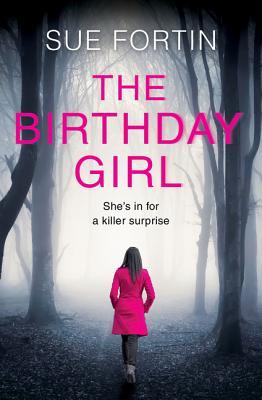 The Birthday Girl looked like a psychological thriller that would appeal to me, given the atmospheric cover and the premise, but I was initially a bit disappointed. I was a little underwhelmed with the set-up, it seemed a little obvious as to what was happening, and if you read the synopsis it seems clear, at least initially, who the antagonist will be. So I considered DNF'ing and ultimately went with skim reading sections of it, but then at about forty percent of the way through something happened and I was hooked. From that point on the story definitely had my attention!

Carys is a woman with a secret, something from her past that she's ashamed of, and when she is invited to an adventure weekend type of birthday party, it looks like her secret (and maybe those of her friends as well) may get spilled. Her, Andrea and Zoe have been invited by their prickly friend Joanne to spend a weekend at a remote location, sans cell phones naturally, and while initially they feel like maybe Joanne is going to use the opportunity to clear up some lingering issues, it soon becomes apparent the opposite is in fact true. Old resentments lingering under the surface come out, and things start to get tense when Joanne does questionable things, but nothing can prepare them for what actually happens.

Like I said I was initially underwhelmed, the set-up seemed way too obvious, and I was like would people really be this dumb, to give up their phones and go along with this? But beneath the rather implausible beginning is a smart tale of what happens when friendships go wrong- and don't we all have friendships that have problems? Misunderstandings and resentments are of course one thing, but here there is something that happened that the parties involved have very different takes on, and once the first twist happens I thought we were veering into unreliable narrator territory. Seriously everyone is suspect at some point in this story, and while a twist at the end seemed a little too obvious, the twist after that was a shocker. And the story ends on a pretty dark note.

So I'm glad I stuck with this book. Yeah I skimmed a few passages but partly that was because I couldn't wait to get to the next twist, or to see what happened after this or that occurrence. There was even a surprise POV added into the mix that further muddied the waters. All in all this was a twisty thriller that overcame a slow start and provided a satisfying end.
Posted by Greg at 12:00 AM