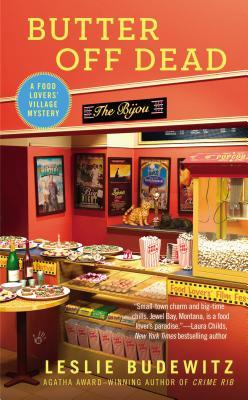 Butter Off Dead is a fun cozy and the third in the Food Lovers Village series. I have to admit, I tried this one based solely on the cover- I love old time movie theaters and idea of a film festrival mixed with a small town appealed to me. I'm happy to report that I enjoyed this one.

Erin Murphy and her friend Christine Vandeberg are planning the Food Lovers' Film Festival in Jewel Bay, Montana. Erin runs the Merc, a hundred year old grocery and Christine is dating her brother. When Christine is found dead at her home, there are several suspects a student who was there when the body was discovered, several other townsfolk, and Erin's brother Nick. Erin knows he couldn't have done it, but in spite of herself she begins to wonder after his alibi looks shaky.

This was a good cozywith an engaging protagonist in Erin and a fun cast. Her mother Fresca is the smarky matriarch and there are some other interesting characters as well. I liked that there was a cast of characters in the front, but even with that it took me a while to sort out who eeverybody was. Not sure if that's because this is the third book and I'm jumping in, or because there are so many characters to keep straight right off the bat. Probably both.

The town is well drawn, and early in the story when they're all hanging out in the bar I felt like I was right there, with the music and the low lights. There's a lot of food in this one, and she does a great job evoking Jewel Bay as something of a food haven. I did guess the identity of the killer although I wasn't sure, there areclues that make it somewhat obvious, but it's still a good mystery. And we get an examination of small town life in a tourist town, and the jealousies and rivalries that can happen anywhere.